The Chunky Monkey grows with family 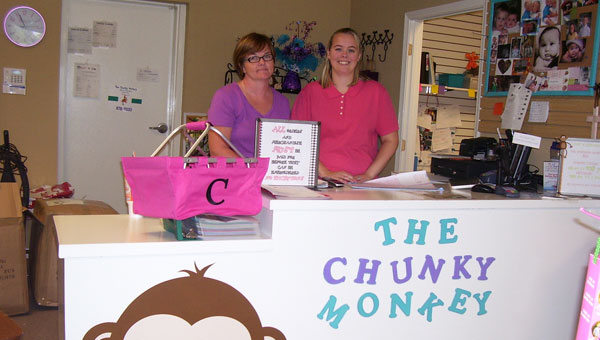 What kind of store is The Chunky Monkey? I wondered, when first hearing the name of the new Chelsea establishment.

I finally stopped by and saw it was a beautiful, unique shop specializing in custom embroidery and appliqués.

“The store started as a dream, and very quickly became a reality,” said Dawn Keff, co-owner and operator with her husband, Alan. When they learned in 2006 that they were expecting their first child, they decided they needed more flexible work hours to be home when needed with the baby, Dawn said. So they began working to make their dream a reality.

Finding out in February 2007 that they were expecting a second child, they moved the business. For around two years, they operated from a storage closet in the back of her father’s store, Ruff and Tuff Outdoors.

With employees helping take orders, the business experienced growth — right along with their family. They moved into a building of their own, in the strip plaza near her father’s business, in July 2009 “just in time for baby number three to arrive,” Keff said.

The Chunky Monkey offers personal and commercial services, said Keff. She also has gifts, clothing, bags, baby items and other products that can be personalized with embroidery or appliqués.

Monogram orders may also be placed at Ladybug Lane on U.S. 119 in Alabaster, where the Keffs have a room featuring items found at The Chunky Monkey in Chelsea.

Dawn Keff said they would like to thank everyone for their support over the past few years and their help in making The Chunky Monkey a success.

“As new business owners and parents of three very small children, we find ourselves very blessed to have a thriving business in today’s economy,” she said.

“Operation Christmas Child is a simple, tangible way for children and teenagers to join adults in sharing the joy of... read more