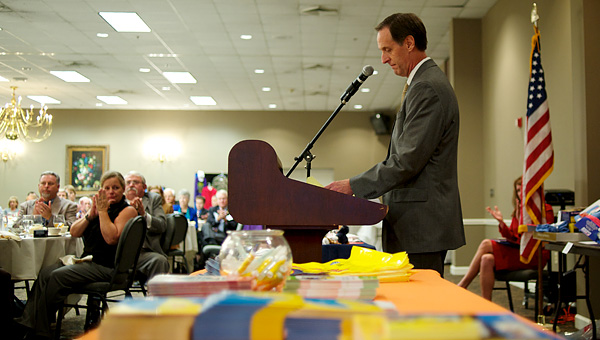 Pelham Police Chief Tommy Thomas had never been placed in this situation before. He had never explained the Pelham Police Department’s Officer of the Year with such a mixture of joy and sorrow.

As he took the podium Sept. 29 at the Pelham Civic Complex, he immediately began to fight back tears.

“Y’all, if I get choked up, I’m sorry,” Thomas told the crowd packed into the Civic Complex banquet hall. “I have someone else waiting to speak for me in case I’m not able to finish this.”

Thomas was not the only one in the room fighting back emotions as he prepared to hand the Officer of the Year plaque to Paula Davis, wife of slain Pelham Police Officer Philip Davis.

Echoes of quiet weeping emitted from nearly every table in the room as Thomas explained his last few days with Davis.

“On November 30, 2009, Officer Davis issued a training bulletin titled ‘reinvent the wheel,’” Thomas said. “In it, he warned us to be cautious and absolute in our safety every day.

“He asked us to take our training seriously. That was Officer Davis’ last bulletin to us,” Thomas added. “We saw that as his final gift to all of us.”

Three days after issuing the bulletin, Davis was shot and killed during a traffic stop on Interstate 65.

“Our police officer of the year is not here today, unfortunately,” Thomas said. “He sacrificed all of his tomorrows to give us the safety we all enjoy today.”

While awarding Davis the Officer of the Year distinction, Thomas told of a professional, hard-working man who was well-respected and easy to get along with. 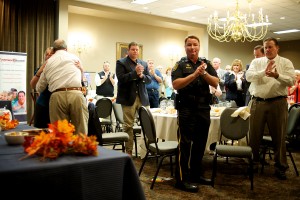 After receiving hugs and a standing ovation, Paula Davis, far left, made her way to the podium to accept the award for her husband, Philip Davis. (Reporter Photo/Jon Goering)

“He came to our department in 2005, and he quickly gained respect from his fellow officers,” Thomas said. “He had a tremendous sense of humor.”

Thomas described Davis, the only Pelham Police officer ever killed in the line of duty in the department’s history, as one of the greatest heroes the city has ever known.

“Some seem to think it’s fashionable to say the age of heroes is over,” Thomas said. “In this day and time it is particularly hard to find those larger-than-life people. Philip Davis was one of them.

“We honor heroes like Philip, not because he died or how he died, but because of what he did when he was alive,” Thomas said.