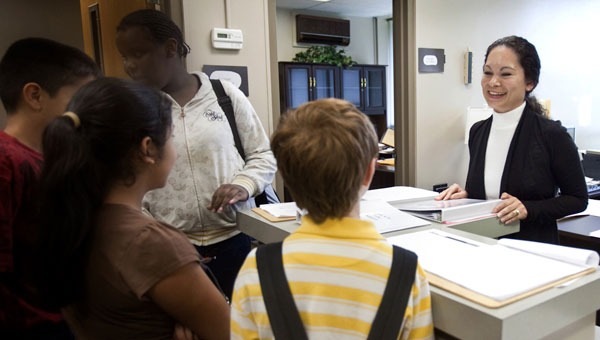 Yanira Brannon talks with students in the office of the Thompson Sixth Grade Center in Alabaster where she often serves as translator for parents and students for whom English is not their native language. Brannon came to the United States from El Salvador when she was just 7. (File Photo)

Editor’s Note: This story is the first in a year-long in-depth series aimed at examining the growing Hispanic population in Shelby County and the mutual affects the culture transfers to the county and the county reflects back on the Hispanic culture.

At just 7-years-old Yanira Brannon traveled with her parents from El Salvador to California. She spent 21 years there before moving to Shelby County where she now works as the secretary at the Thompson Sixth-Grade Center.

“I came at a very young age, so I quickly adapted to the American way of life,” Brannon said.

Brannon grew up in a predominantly Latino community in California where she became fluent in both Spanish and English. She knows however that many of the children and parents she works with every day have had to struggle more than she to integrate into their new society.

“I do speak to people that feel like they have been treated poorly — in my personal life though I don’t feel I have experienced that. I’ve been lucky,” Brannon said.

The Hispanic population has increased dramatically across the Southeast over the last 20 years, according to the Pew Research Center. When the increase initiated in the 1990s many flooded to the Birmingham area.

“One person goes to a place and word gets back home that things are good there and others tend to follow,” said Isabel Rubio, director of the Hispanic Interest Council of Alabama.

It’s the same reason people move to most any location, Rubio said.

According to the Pew Hispanic Center, a project of the Pew Research Center, Hispanics accounted for only 1 percent of the population in 1990. 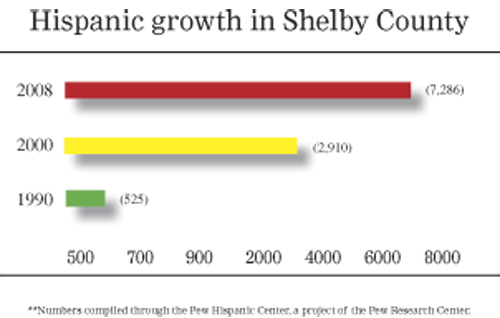 That’s still a small percentage compared to California, Brannon said, where most businesses cater to the Latino community.

“Here they are in the minority so they do struggle – often times they have to go to particular places of business because they cannot speak English,” she said. “Many times they take their kids to translate for them.”

In 2002, more Latinos owned businesses in the county than in Alabama as a whole. In fact, 1.7 percent of business owners were Hispanic that year.

“In a lot of places you don’t necessarily see Latinos working there,” which Brannon said can be intimidating. “I think a lot of people think Latinos don’t learn the language because they don’t want to and that’s not always the case.”

She said many times they can’t find the resources or the time to take classes because they work day and night.

“The ones I know are very hardworking individuals – they came to give their children a better life,” she said.

That increase amounted to a 150 percent jump and marked the county as the 100th county for the largest percentage increase in Hispanic residents. More than 3,000 counties were studied.

Lea Dodds Black, supervisor of English as a Second Language program for the Shelby County School System, said the increase can be seen across the board. Shelby County Schools has seen a 40 percent increase in students who select Spanish as their native language in the last five years.

“When you have children of parents who struggle with literacy themselves that’s going to impact the students,” Dobbs said. “So we do whatever we can to help those families as a whole.”

“We help people all across the spectrum,” she said.

HICA works with immigrants to teach English, assist them in applying for citizenship, helping victims of domestic violence and providing bi-lingual case management for those who only speak Spanish. An immigration attorney also visits once a week.

“What we do is fill the gap so that people can get those mainstream services that we can broker for them,” she said.

HICA established a Shelby County office shortly after the murders of five Hispanic men in an apartment off U.S. 280 in 2008.

Rubio said HICA began previously to notice a quickly uprising trend in Shelby County, yet the murders on U.S. 280 brought to light how desperate the community’s need was for the presence of an organization willing to offer guidance to those afraid to seek help.

It brought the situation to light not only for Rubio but also for County Manager Alex Dudchock who Rubio said helped encourage an office be located at the County Services building in Pelham.

“Shelby County has definitely risen to the challenge and done an incredibly job with English as a second language,” Rubio said. “And you see how it’s making a difference not only with the kids but with the parents as well. The willingness to devote resources to that is fabulous and makes such a difference.”