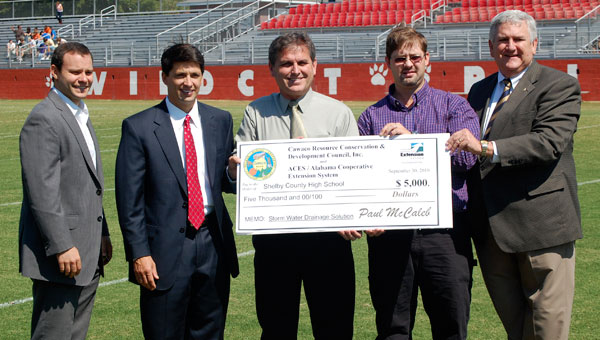 COLUMBIANA — Shelby County High School Principal Gene Rogers has feared downpours on Fridays in the fall ever since he came to the school in 2002.

Rogers knew the football field at Papa McCombs Stadium in Columbiana wasn’t prepared to handle a significant amount of rainfall due to a drainage issue.

The rainwater formed pools on the sideline at the stadium, including one Rogers said was “8 to 10 inches deep” at times in the southwest corner near the visitors’ seats.

“(The rain) would interfere with a football game,” Rogers said. “If a player was tackled at the 10-yard line near the sideline in the corner, they would just go sliding. We felt like we had a real issue here.”

The Wildcats no longer have to worry about the drainage problem thanks to a $5,000 grant from the state legislature through the Cawaco Resource Conservation and Development Council, and help from the Shelby County Soil and Water Conservation District and the school’s Future Farmers of America organization.

The project, which began in April 2010, was completed in less than two months with the help of approximately 90 vocational students at Shelby County High School and Kim Joiner of the Shelby County Soil and Water District. Phillips said the group dug a hole on the sidelines to install a pipe to drain standing water away from the field and into a nearby creek.

The group filled in the dirt and planted sod after the project was completed, Phillips said. 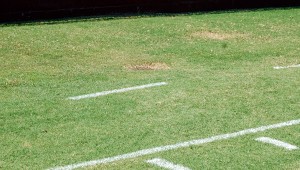 The new drain installed at Papa McCombs Stadium by vocational students at Shelby County High School, through a grant from the state legislature, solved a drainage issue at the stadium. (Reporter Photo/Wesley Hallman)

“We finished the day before graduation,” Phillips said.

Rogers thanked Cawaco and the state legislature, which allocates grant money for soil and water projects around the state. Cosby said Cawaco coordinates 10-12 projects in Shelby County each year.

“It’s probably one of those capital projects that we could not have afforded,” Rogers said. “It’s been a really good project for Shelby County High School.”