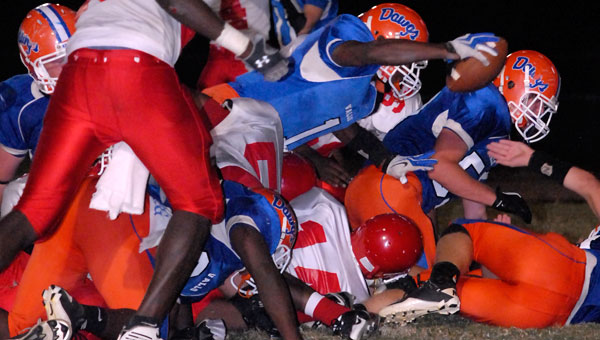 Montevallo High School junior quarterback Taylor Burr and junior running back R.J. Scaife accounted for two touchdowns each as the Bulldogs fell 42-28 to Sumter County in a Class 3A, Region 4 contest Oct. 1.

Scaife scored the first touchdown for the Bulldogs (2-4, 1-3 in Class 3A, Region 4) with his 17-yard scoring run with 7:12 remaining in the second quarter.

Burr capped the scoring for the Bulldogs with his 23-yard scoring strike to Ronezz Stevens with 4:28 left in the game. Kicker Brett Gray converted all four point-after attempts.

Burr completed 10-of-20 passes for 139 yards with a touchdown and an interception.

Scaife led the Bullldogs with 75 rushing yards and two touchdowns on 25 carries. Montevallo was held to only 85 yards on the ground in the loss.

Montevallo travels to Northside for another region game Oct. 8.