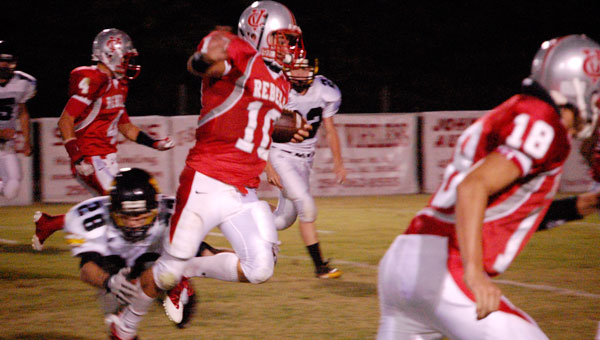 The Trojans defense could not handle the rushing attack of the Rebels. Meadowview allowed Coosa Valley to score on every drive in the first half, including an 80-yard run by senior quarterback John Bullen.

The Coosa Valley defense allowed only one score late in the second quarter to head into the locker room with a 42-7 lead. Coosa Valley racked up 320 yards rushing in the first half alone, led by Bullen’s 150 yards and three touchdowns on the ground.

With a big lead at the half, Coosa Valley let most of the starters rest to start the second half.  With the Rebels’ first team on the sidelines, it was time for the Trojans to get to work.

After giving up a score on the first drive of the third quarter, Meadowview went on to score 27 unanswered points on their next four drives. However, the late scoring frenzy was too little, too late for the Trojans in this matchup as the clock expired.

Coosa Valley ended the night with 410 total yards, with 347 of those coming on the ground. The Rebels (5-1 overall, 3-0 in AISA Class 1A, Region 1) head to Sparta Academy in their next game Oct. 8 to take on the Warriors.

Cornerstone Christian School running back Clayton Halbert breaks away from a group of Jackson Academy defenders in the Chargers' loss... read more