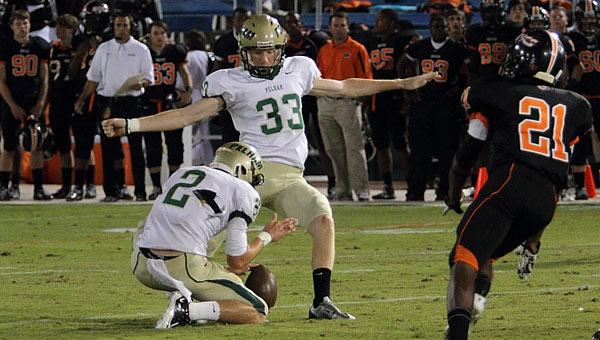 Despite moving the ball efficiently for four quarters, the Pelham Panthers fell 29-17 Oct. 1 at Regions Park to the undefeated Hoover Buccaneers.

“I thought our guys left everything on the line tonight,” said Pelham head coach Brett Burnett. “If we continue to play with the same effort we have played with the past two weeks, we will continue to improve.

“We have been fighting, and we are going to continue to fight and get better,” Burnett added.

The Buccaneers lit up the scoreboard during their first possession of the game, when running back Justin McArthur ran into the end zone from 24 yards out.

The home team attempted to add to its lead on its next possession, but Real’s 25-yard field goal attempt again missed its mark.

On the next series of the game, Pelham capped off a 75-yard drive with a 25-yard field goal from kicker Cameron Haynes, bringing the game to 6-3.

Pelham then forced Hoover to punt on its next possession, setting up a 43-yard touchdown pass from quarterback Gray Cato to Reed Bright.

The Bucs answered on the next drive, when Caleb Sims caught a pass from Ryan Carter in the end zone. Real added the extra point, giving Hoover a 13-10 advantage.

With less than a minute left in the first half, Pelham’s M.J. Brown caught a 36-yard scoring pass from Cato.

But the Bucs answered in the third quarter, when Real connected on a 25-yard field goal.

On its next possession, Hoover’s Dakota’s Daniel ran into the end zone from 16 yards out. Real’s extra point brought the game to 23-17.

Hoover added another six points on a 7-yard Justin McArthur run, but the team’s two-point conversion was unsuccessful.