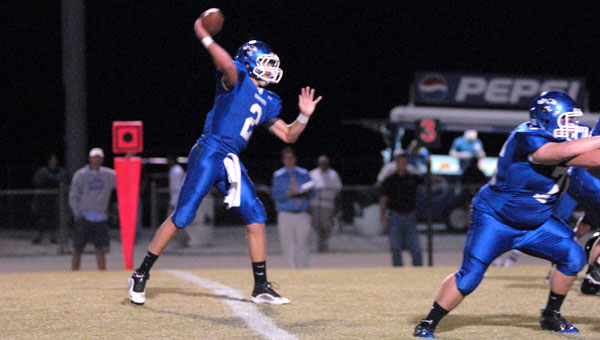 CHELSEA — After watching his team struggle through consecutive losses to Briarwood Christian School and John Carroll, Chelsea coach Wade Waldrop stood on the damp grass of Richard Conkle Stadium Sept. 24 following the loss to the Cavaliers and challenged his team with a simple message — improve the effort and develop some toughness.

“(I challenged the players) all week. I just feel like our effort was not great the last two weeks,” Waldrop said. “(Tonight’s game was) night and day from an effort and physicalness standpoint for us from the last two weeks. They practiced well, and you’re going to practice like you play. I’m proud of them.”

The majority of the physicality came from the Hornets’ offensive line, which paved the way for 268 rushing yards and three touchdowns on the ground.

Quarterback Jake Ganus accounted for 127 of those yards and one touchdown while running back D.J. Washington had 67 yards and a touchdown on 11 carries. Fellow running back Julius McCall also had a rushing touchdown to go along with 64 yards on 21 carries.

“We came out, and we dominated their defensive line,” Ganus said.

Ganus’ 2-yard scoring run counted for Chelsea’s first touchdown of the night to give the Hornets a 9-0 lead with 4:54 left in the first quarter.

Washington’s touchdown scamper — a 16-yard run around the right end and down the sideline on Chelsea’s first possession of the second quarter— pushed the Hornets’ lead to 16-0 with 9:47 remaining before halftime.

McCall tacked on another six points with 34 seconds left in the first half with a 7-yard touchdown run up the middle, and Ashley Page added the extra point to give Chelsea a 23-0 lead at the break.

The success of the running game played to Ganus’ advantage, as the junior went to the air in the second half and threw two touchdowns.

After faking a hand-off to fullback Blake McLaughin and drawing the Indians’ defense up, Ganus found wide receiver Matthew Graben all alone from 48 yards out to increase the Hornets’ lead to 30-0 with 6:52 left in the third quarter.

“We ran the ball all over them and that opened the passing game up,” Ganus said. “My receivers were wide open, and I hit all my throws.”

Pinson Valley got on the board twice in the final quarter, as running back Lorenzo Gray found paydirt on an 11-yard run, and Harris hooked up with wide receiver De’Andre Rogers in the back of the end zone for a 13-yard scoring strike with 1:38 remaining in the contest.

Harris completed 18-of-29 passes for 153 yards and a touchdown to go along with two interceptions.

Gray had nine carries for 68 yards and a score.

Waldrop said the win gets the Hornets back on track for a run at the Class 5A playoffs.

“It does help us,” Waldrop said. “It opens up that second spot (in the region). It leaves the doors open.”

Chelsea returns to action Oct. 8, as the Hornets travel to Erwin. Pinson Valley will host Briarwood Christian on the same date.