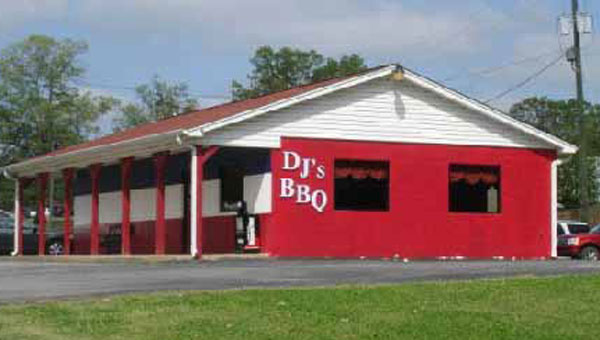 Everyone in Wilsonville loves pulling up to the little red building in the center of town for some good, homecooked barbecue.

Memory Finn and her husband Matt Finn own DJ’s BBQ in Wilsonville. Dawn and Jean Davis built DJ’s BBQ originally, but Memory bought it from them three and a half years ago.

“We used to run Richey’s BBQ in Harpersville, but we decided to branch out on our own,” Finn said.

This coming March, they will have been in business for nine years.

“We’ve been very blessed since we’ve been here,” she said.

“We hosted the antique tractor and car show, and do plan on being there again next year,” Finn said.

DJ’s BBQ offers takeout, and does a lot of catering in bulk quantities, too.

“Everything is homemade, made right here. We use a smoker, rather than a pit,” Finn explained.

They make their own sauce with a secret recipe that has only changed slightly since the original barbecue they first began at Richey’s BBQ.

“Why mess up a good thing when you have it?” Memory said.

The Finns have a big family of three children together — two sons, and a daughter.

They also have two grandsons. Although Memory’s sons are grown now, her step-daughter goes to Vincent Middle School. Their family is in the Wilsonville and Vincent area.

Memory has several dogs she enjoys taking care of when she is at home, and Matt also has a hobby of raising chickens.

He likes to have the fresh eggs, Memory said.

“Between work, and the kids, and the grandkids,” Memory describes her busy lifestyle is fun and keeps her running.

The Alabama Pipes and Drums organization from Birmingham, as well as men dressed up from the Revolutionary War Camp, could... read more