Meals under the bridge 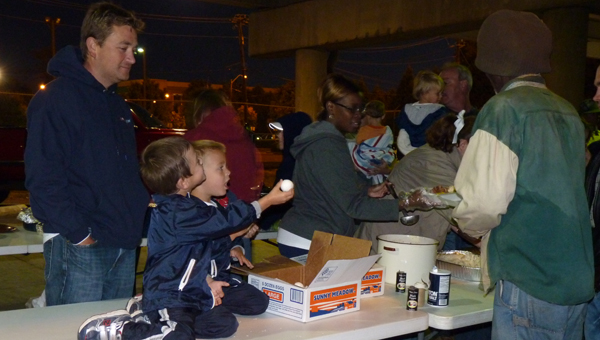 Aiden and Austin Hughes, of Mountainview Baptist Chuch in Chelsea, hand a boiled egg to each of the homeless people under a bridge in downtown Birmingham.

CHELSEA — On Oct. 3, volunteers from Mountainview Baptist Church in Chelsea gathered under a bridge in downtown Birmingham with drug addicts, alcoholics, convicted criminals and those just down on their luck.

The sound of cars speeding by could be heard on the freeway overhead as the volunteers served the homeless group of more than 100 a homemade dinner. Two four-year-old boys laughed and smiled as they handed each person a boiled egg.

The scene is nothing new for Mountainview Baptist volunteers who come to this bridge the first Sunday of every month to feed the homeless. Beverly Wallace, director of the church’s homeless ministry said they started the feedings almost a year ago by partnering with an organization called The Nest.

The Nest organizes the meals three times a week with the help of 20 local churches.

“It started as one man feeding one man, a homeless veteran,” said Don Williams, The Nest coordinator. “Now it’s turned into 20 churches feeding 125-150 homeless people three nights a week. We couldn’t do it without them.”

Mountainview Baptist partners with one other church to provide a dinner every month. Wallace said the volunteers coordinate a menu and everyone pitches in with food and supplies. 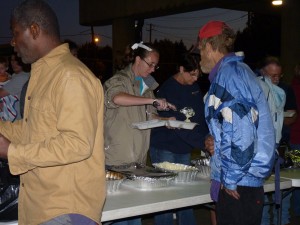 Mountainview Baptist volunteers serve homemade dinners to the homeless in downtown Birmingham once a month.

“We never run out of food,” she said. “We worry about it all the time, having to turn someone down. We’d rather have too much. We never want people to leave hungry.”

“We’re doing this because it’s what God told us to do,” Wallace said. “He told us to take care of the down trodden and that’s what we’re doing. Once you’ve seen this, once you’ve experienced this, you can’t sleep in your bed the same way again.”

Benjamin Chambers said he started attending the church feedings a year and a half ago when he was deep in a drug addiction. Now that he’s sober, he proudly shows off his Salvation Army resident’s badge. He said the church feedings gave him hope, showing him there were people out there who cared enough to help him.

“Nothing changes, the food is good all the time,” he said. “I can’t thank God enough for it. I remember when I used to come down here, I had no where to stay except for under bridges. I’m so grateful.”

Mountainview Baptist member Jennifer Hughes helps with the feedings every month, bringing her husband and twin four-year-olds. She said at first she was hesitant to bring her sons, but wanted them to learn first-hand about giving.

“We haven’t missed a Sunday,” she said. “I like to see them lineup with the kids. They love us and we love them.”

Handing out boiled eggs to the homeless has already made an impact on the boys, Hughes said. 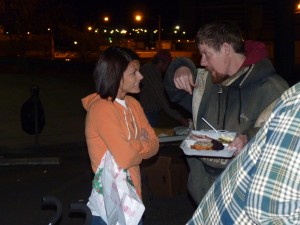 Wallace said she hopes those who benefit from the free meal take away more than just a full belly. Each month volunteers work on building relationships with those who go through the line, showing them God’s love and the hope provided in the gospel.

“Homelessness will never go away,” she said. “In our economy, people are losing their jobs, losing their homes and this is where they end up — on the streets. We look forward to this every first Sunday because they’re our family, they really are.”