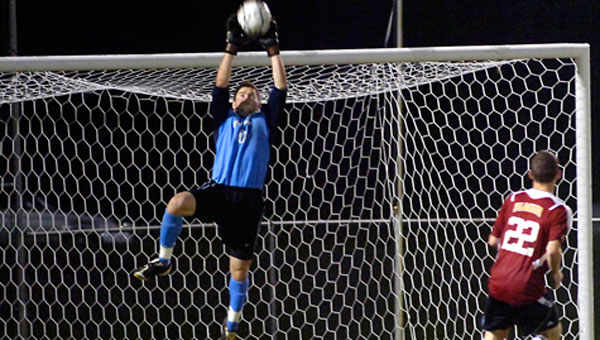 University of Montevallo freshman goalkeeper Brendan Ledgeway has posted four shutouts in goal for the Falcons, who are off to their best start in school history through the first 10 games of the 2010 season. (Contributed)

The University of Montevallo men’s soccer team picked up two wins last week to push its undefeated streak to 10 consecutive matches to start the 2010 season.

Already off to their best start and having earned their highest ranking in school history, the Falcons defeated Auburn University in Montgomery in a match Sept. 29 against the NAIA squad and picked up a 3-1 win over Francis Marion University in a Peach Belt Conference match Oct. 2.

The Falcons (9-0-1, 3-0-1 PBC), who are ranked No. 3 in the latest National Soccer Coaches Association of America Division II poll, and Patriots played a to a scoreless tie in the first half Oct. 2.

Francis Marion took a 1-0 lead midway through the second half before Montevallo responded just a minute and 45 seconds later as senior Daniel Pelletier sent a cross into the box that senior Milan Pualic collected and shot past a diving goalkeeper to tie the game at 1-1.

Just under eight minutes later Pualic pushed the ball past the defense and found senior Nathaniel Foster running down the middle of the field. Foster collected the cross and shot a ball in the upper corner of the net to put the Falcons ahead 2-1.

The final goal of the game came in the 87th minute as Foster attacked the middle of the defense and fed the ball out to senior Alex Ghoja, who kicked it past the keeper for a 3-1 lead.

Goalkeeper Brendan Ledgeway made one save and gave up one goal in the win.

Pualic had a part in all four goals in the Falcons’ win Sept. 29 as he scored the first and fourth goal and assisted on the second and third.

Freshman goalkeeper Ledgeway picked up his eighth win of the season as he made six saves and allowed just one goal.

Montevallo struck early as Pualic scored the opening goal just 10 minutes into the first period with an assist from junior Tyson Eyo. The Falcons held a 1-0 lead for the next 24 minutes, but the Senators tied up the game with just over 10 minutes left in the first half.

After the halftime break, the Falcons began the second half in exciting fashion as Pualic took the opening kick and found Ghoja streaking past the defense. Ghoja scored the go-ahead goal just 10 seconds into the second half.

Pualic dished out another assist just 18 minutes later as he sent a ball into the box that was headed in by redshirt sophomore Stephen Beatty. 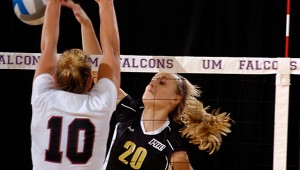 University of Montevallo freshman Taylor Chapman, who was named the Peach Belt Conference's Player of the Week, led the Falcons with 17 kills in a win Oct. 2 over Catawba College on the campus of Augusta State University in Augusta, Ga. (Contributed)

The University of Montevallo volleyball team ran its unbeaten streak in the Peach Belt Conference to six matches while also picking up a win over South Atlantic Conference member Catawba College in a pair of matches Oct. 2 at Augusta State University in Augusta, Ga.

Montevallo was led by sophomore Virginia Clay, who had a team-high 15 kills and four blocks. Freshmen Michelle Carle and Taylor Chapman each had 13 kills. Redshirt freshman Manyi Ati had 12 kills.

The Falcons were led by Chapman, who had a team-high 17 kills while also digging up 11 balls for her first double-double. Chapman was named the Peach Belt Conference’s Player of the Week following the Oct. 2 matches.

Dowd also had a double-double with 15 kills and 12 digs.

Ati finished with 13 kills and added a team-high four blocks.

Garrison picked up her 10th double-double of the season with 54 assists and 13 digs. Wilson led the team with 23 digs.

Women’s soccer battles to a tie with North Georgia

The University of Montevallo women’s soccer team battled to a 2-2 tie with North Georgia and dropped a Peach Belt Conference match against Armstrong Atlantic last week.

The Falcons were led by freshman Taylor Kerr, who scored a goal and dished out an assist.

Montevallo (2-7-1, 0-4 PBC) struck first just 18 minutes into the game as Kerr scored the first goal of her career off an assist from junior Denise Mannion.

The Falcons struck first once again in the second half as sophomore Nicola Stolworthy scored off an assist from Kerr in the 79th minute. With just under two minutes left in regulation the Wolves scored the equalizer to push the game into overtime.

Freshman Kaitlin Thomas played all 110 minutes in goal and made eight saves while allowing two goals.

Montevallo’s lone goal of the match came off the foot of freshman Christine Prince with just over five minutes to play in the match. Sophomore Paige Scott sent in a cross that was finished by Prince.

Senior Ruwaldt Viljoen led the Falcons as he finished tied for sixth and just one stroke out of second place with his two-round score of 3-over par 147.

Viljoen opened the tournament with a 1-over par 73 in the first round followed by a 2-over par 74 in the second round. The Falcons next highest finisher was junior Gonzalo Gambertoglio, who finished tied for 35th with a two-round score of 11-over par 155.

Junior Aaron Ebert finished just one stroke back with a 12-over par 156, which put him in a tie for 37th. The Falcons final two golfers were sophomore Mariano Lepori and freshman Joe Haupt, who finished 56th and 58th, respectively. Lepori had a 16-over par 160. Haupt shot an 18-over par 162.

The Falcons finished ahead of nine teams, including Georgia Southwestern, Florida Tech, the University of Tampa and Eckerd College.

The University of Montevallo volleyball team is the only undefeated team remaining in Peach Belt Conference matches this season following... read more