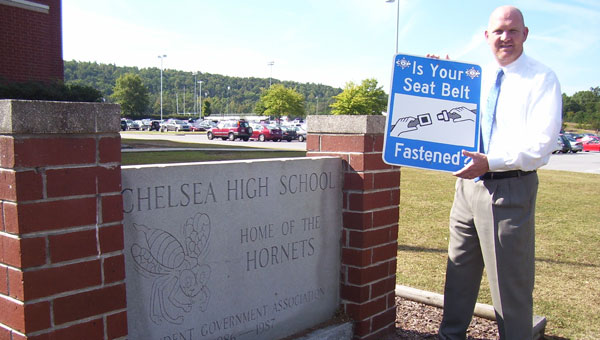 Chelsea High School Principal Jay Peoples displays one of the signs being put up along roads near schools in the Chelsea community by the Citizen Observer Patrol (COP).

“Student safety is something we are concerned about and plan for as a matter of course,” said Chelsea High School Principal Jay Peoples. “It’s one of our most important functions as public educators. I would hope our commitment to this priority is constant.”

As a part of their “Buckle Up Campaign,” Chelsea’s Citizen Observer Patrol organization (COP) is putting up signs near the campus of Chelsea schools, reminding drivers to fasten seat belts, said Dale Neuendorf, Chelsea COP Director.

Peoples said the group made him aware of this plan a couple of weeks ago. He does not know yet whether students are buckling up more consistently, but certainly hopes the signs impact their behavior in this area.

He said the school is “in the process of putting together a program highlighting the dangers of impaired or reckless driving.” They will coordinate the program with prom season to encourage students to make wise, informed choices.

Programs highlighting automobile safety are not the only safety programs being implemented by the school. When asked about programs regarding other areas of student safety such as when there is a fire, terrorist or bomb threat, storm warning, etc, the principal said that, as with any public school, “Chelsea High School has a comprehensive safety plan, updated annually, to ensure the safety of our students in the event of emergencies.”

“We appreciate the efforts of all law enforcement personnel on behalf of our students and always welcome the opportunity to partner with them on important issues like student safety,” Peoples said.

The Chunky Monkey grows with family

Robin Robinson (Left) assists Dawn Keef in her thriving new business, “The Chunky Monkey.” What kind of store is The... read more