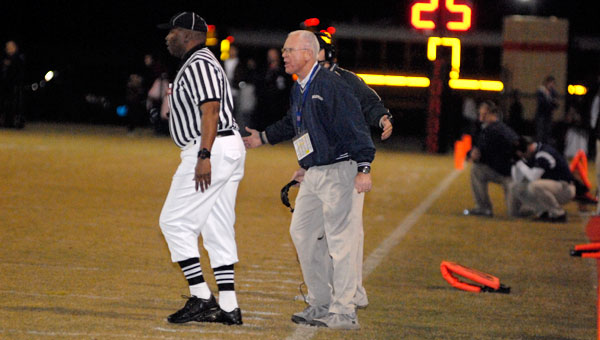 Fred Yancey, in his 21st season as the Lions’ head coach, will serve as the head coach for the Alabama team in the Dec. 11 all-star game at Ladd-Peebles Stadium in Mobile. Kickoff is set for 1 p.m.

Whorton, a 6-foot, 170-pound kicker/wide receiver, has played a key role for Briarwood’s offensive and special teams units during his career at Briarwood.

Whorton has connected on 4-of-5 field-goal attempts this season, including a career-long 44 yard field goal. Whorton, who completed a pass for a 2-point conversion in the Lions’ 29-0 win over Erwin, has nailed 18-of-20 extra-point attempts this season and has accounted for a total of 30 points. Whorton has punted the ball 14 times for an average of 39.2 yards per punt, including six punts inside the opposing team’s 20-yard line.

Whorton also serves as the kickoff specialist and is averaging 56.6 yards per kickoff. Whorton has also caught two passes for 26 yards through the first six games of his senior season.

Whorton finished with two receptions for 20 yards as a junior.

Whorton and his Alabama teammates will attempt to extend their winning streak in the series to three games. Alabama holds a 16-7 edge in the series.

“We think our selection committee has once again put together a very good team,” Bailey said. “We know Mississippi will have a talented team. This Alabama squad is one of our most talented in the series. We have an excellent head coach in Briarwood Christian’s Fred Yancey. He has a good staff set to assist him.”