Game Ball: A history of the Pelham-Thompson rivalry 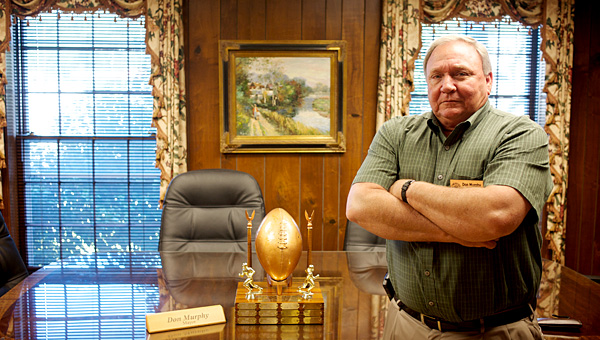 To recapture the trophy from the Pelham City Hall building, the Warriors are going to have to go through Pelham Mayor Don Murphy as well as the Panthers from Pelham. (Reporter Photo/Jon Goering)

Sitting on the bottom row of a glass shelf in Pelham Mayor Don Murphy’s office is a nearly 23-year-old item coveted by mayors, coaches and hundreds of football players in Shelby County’s two largest cities.

Every October, the Pelham High School Panthers and the Thompson High School Warriors step onto the same field to battle fiercely for a bronzed football mounted on a block of heart pine timber.

The annual Battle for U.S. 31 rivalry game has the ability to save or ruin a season and grant bragging rights in north-central Shelby County for the next 365 days.

After every Pelham-Thompson football game, the mayor of the city with the losing team is forced to publicly present the game ball trophy to his counterpart in the winning city.

“It doesn’t really matter how good one team is or how bad the other team is,” said Alabaster Mayor David Frings. “It’s like the teams just have a spell on them during that game.” 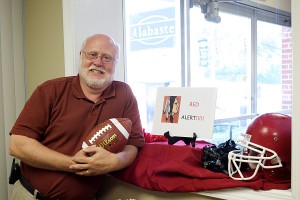 With a spot right inside of the front door of the Alabaster City Hall already picked out, Mayor David Frings hopes the Warriors can recapture the trophy from Pelham this year. (Reporter Photo/Jon Goering)

“Shoot, you can just throw the teams’ records out the window. Both teams are going to get up for this game every year,” said Pelham Mayor Don Murphy. “It’s about bragging rights. You know how young folks are. They like to get out and talk.”

The two teams have played annually since 1978, with Pelham winning 17 games compared to the Warriors’ 15 games. Pelham has scored 633 points in the series, to Thompson’s 631.

About 10 years after the schools started playing, a THS graduate living in Pelham noticed something was missing. The winning team had nothing tangible to signify their victory over their heated rivals.

“Teams like Minnesota play for the Little Brown Jug. I thought we needed to come up with something like that for the Pelham-Thompson game,” said Eddy Jowers, a THS graduate who currently lives in Pelham and serves as the city’s public works director.

Jowers began collecting historically significant items from both cities and forming them into a trophy.

The base of the trophy is a block of heart pine timber taken from the floor of the old Pelham School, which was located where the Pelham City Hall currently stands.

Small golden plaques depicting the score of many of the games are attached to the sides of the wooden block.

“We are reasonably certain that is one of the first game balls,” Jowers said.

On each side of the game ball are wooden spindles used at the old Buck Creek cotton mill in Alabaster. Tiny eagles crafted by a local trophy shop are perched atop each spindle.

“We were just brainstorming one day, beating the breeze around the wood stove,” Jowers said. “We just thought it was appropriate to make the trophy out of things from the two cities.

It is not uncommon for the game to spur bouts of friendly trash talking between the two mayors, Frings and Murphy agreed.

“We need to get together and make a bet on the side, just to make it more interesting. Maybe a hotdog or something,” Murphy said with a laugh. “Mayor Frings is a good friend of mine, and we like to kid and cut up about it.”

“(Former Pelham) mayor (Bobby) Hayes and I used to talk some trash about the game, and it’s been known to break out between me and Mayor Murphy,” Frings said. “It’s a friendly rivalry, but we both want that win.”

Three days before the game, both mayors were certain their team would come away with a victory.

“I am getting ready to dust off and polish a spot in my office for that trophy,” Frings said. “When we win, we will have a spot waiting for it.”

“They are coming up to the hill to our house, and we are going to fight hard to defend it,” Murphy said. “We are going to keep this trophy, there’s no doubt about it.”