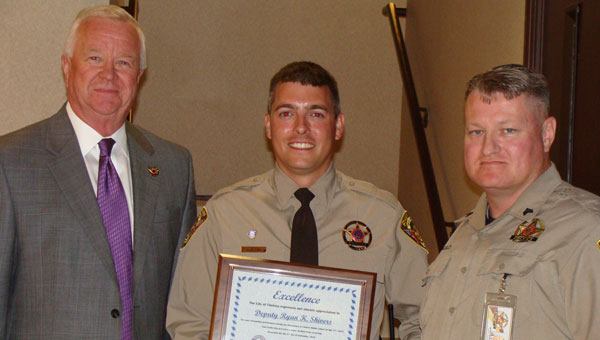 CHELSEA — For Shelby County Sheriff’s Office Deputy Ryan Shivers, the morning of May 17 started as just a normal morning directing traffic in front of Chelsea Middle School and Chelsea Intermediate School. At the time, he had no idea the events that would unfold that morning would lead to him being honored or recognized in any way. He said the thought never crossed his mind.

At the Sept. 7 Chelsea City Council meeting, the city honored Shivers with an award of excellence for his role in locking down the two schools during the hunt for an armed suspect in a nearby neighborhood May 17.

Mayor Earl Niven said Shivers was instrumental in protecting the school and community during the pursuit of the suspect in the woods surrounding the two schools.

During the hunt, Shivers assisted in locking down the schools and directing deputies to form a perimeter. He administered first aid to an officer who had been assaulted and provided continuous updates to his shift supervisor.

“The service he performed and the protection he gave the city of Chelsea was extraordinary,” Niven said. “Just the administrative ability of getting everything set up in such a short period of time and getting the schools locked down to protect our kids.”

Shivers said he was surprised when the city awarded him the honor at the City Council meeting.

“It was a great honor,” he said. “It was highly unexpected. I didn’t expect to get anything for doing what I felt was my job. But I was very honored.”

Shivers has served Chelsea for two years and said his knowledge of the area as well as the training provided by the Sheriff’s Office and his shift supervisors prepared him for the day’s events. He said this training allowed him to act automatically when needed.

“People told me what I did and I have no clue,” he said. “I kind of went into autopilot. I was more concerned about the officer who had been assaulted and his safety and catching the suspect. It wasn’t a personal matter, it was about other people, not me.”

Niven said the award of excellence given to Shivers was out of appreciation to both him and the Sheriff’s Office.

“It’s something we wanted to do, we’re very impressed with the service from the Shelby County Sheriff’s office as our law enforcement agency,” he said.

Bulldogs fall on the road at Northside

Montevallo junior Garrius Chappell attempts a pass in the Bulldogs' 37-31 loss to Northside in a Class 3A, Region 4... read more