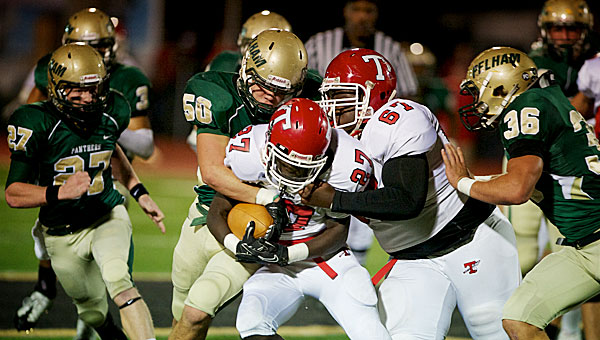 Pelham recorded 311 total yards of offense, 202 of which came during the first half of the game.

Thompson struggled in the first half, recording 64 offensive yards, but finished the night with 208 yards.

“We just kind of survived tonight,” said Pelham head coach Brett Burnett. “This was a real emotional week for all of us.

“Thompson came out here and played us awful well tonight,” Burnett added. “But we were able to hang in there and pull out a win.”

“It was a hard-fought game,” Hill said. “Our defense played its heart out. Our offense had some penalties that put us in a hole.

“I am very pleased with the effort our guys showed tonight,” Hill added. “It was a typical Thompson-Pelham game.”

Pelham was able to drive nearly the length of the field during its first possession of the game, but the Warriors defense held the Panthers at the Thompson 5 yard line.

Pelham kicker Cameron Haynes was unable to connect on a 24-yard field goal, giving the Warriors the ball on the 20 yard line.

Late in the second quarter, Pelham capped off a 61-yard drive when J.T. Ross reeled in a 44-yard touchdown pass from quarterback Gray Cato.

Haynes added the extra point to put the Panthers up 7-0.

On its next possession, Pelham scored again on a 35-yard Haynes field goal, giving the home team a 10-0 halftime lead.

On its third possession of the second half, Thompson cut Pelham’s lead to three, when Trey Matherson powered into the end zone from 1 yard out. Matt Nall added the extra point, bringing the game to 10-7.

The Warriors seemed ready to score again after driving 24 yards in two plays with less than a minute left in the game, but Pelham recovered a Matherson fumble on the Warrior 27 yard line before running the clock out for the victory.