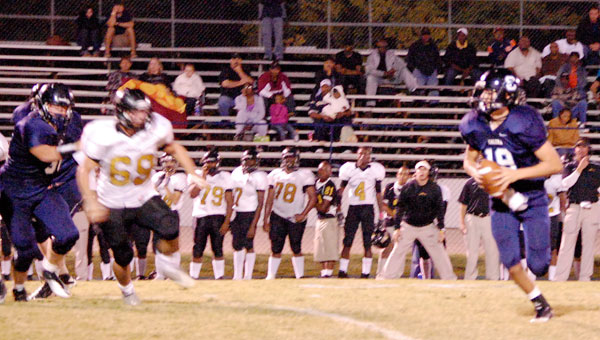 CALERA — The Calera High School Eagles outlasted the Lincoln Golden Bears in a defensive struggle to earn a 17-10 win in a Class 4A, Region 3 matchup on homecoming night Oct. 8.

The Eagles scored the only offensive touchdown of the game on their first drive early in the first quarter after recovering a fumble on their own 29-yard line. The drive was capped with a 6-yard touchdown run by junior running back Eugene Rodgers.

The Golden Bears and the Eagles both forced three-and-outs on the next two drives. The Lincoln defense forced an interception late in the first quarter to take the ball back on the Calera 43-yard line. After driving down the field to their own 7-yard line, a crucial holding penalty took a touchdown off the scoreboard for the Golden Bears. Lincoln was pushed back and had to settle for a 33-yard field goal to get points on the board.

Both defenses held strong throughout the rest of the second quarter and Lincoln forced Calera to kick a field goal to end the half with a 10-3 lead going into the locker room.

The third quarter was owned by the Eagles’ defense. After being forced to punt on its first drive of the second half, the Calera defense forced a three-and-out and a fumble on both of Lincoln’s drives. The Golden Bears only ran six plays in the third quarter for negative 8 yards.

With the Eagles holding on to a 7-point lead and stopping the first three drives by the Golden Bears in the fourth quarter, Calera ran the ball to take some time off the clock. Lincoln got the ball back with a little over two minutes left in the game and started its drive down the field to tie the game. With little time left, the Golden Bears were forced to pass the ball down the field.

On fourth down, Eugene Rodgers came up with a huge interception and returned it 31 yards for a touchdown to help the Eagles take a 14-point lead over Lincoln late in the game.

Lincoln was not done yet. The Golden Bears returned the kickoff 80 yards to narrow the lead to 7 points. Lincoln attempted an onside kick, but was not successful. With a minute left in the game, the Eagles moved into the victory formation to seal the win.

“Defensively we played really well, offensively we made a lot of mistakes to keep this game close,” said Calera coach Scott Martin. “Thank goodness our defense made some good plays.”

The Calera defense held Lincoln to 97 yards of total offense. Calera finished the game with 217 yards of offense, led by Rodgers with 104 yards on the ground. Senior linebacker Alek Kaufmann led the defense with nine tackles, with three of those for a loss.