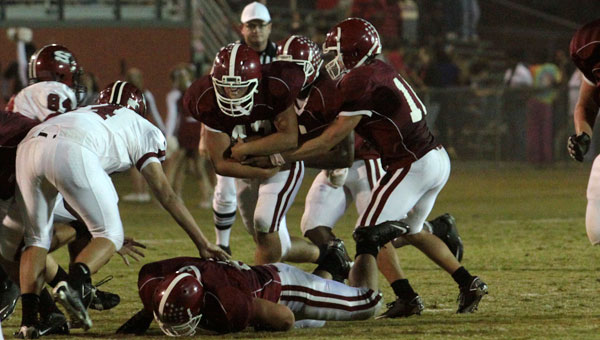 When the final horn sounded, the Aggies claimed  a 42-21 win over Shelby County.

As the youth and inexperience continued to show to show for the Wildcats, they continued to fight and compete until the game is over.

“We had kids that laid it all out tonight and I am proud of the way they put up a fight,” said Shelby County coach Ryan Herring.  “Evan (McNeal) and Denzel (Williams) ran the ball so hard tonight and they had good blocking up front.”

“We just have to keep working and find a way to play some defense and force people to punt the ball and get their offenses off the field,” Herring added.

The Aggies had their offense on the field for three series in the first quarter, scoring on two drives with a 27-yard quarterback run and another 20-yard run to ease out to a 14-0 lead as the first quarter expired.

From their own 23-yard line, the Wildcats battled down the field to see McNeal bolt to the end zone from the Aggies’ 25-yard line.  Early in the second quarter, the Wildcats narrowly trailed 14-7.

However, the slim 7-point margin was short-lived as the Aggies’ quarterback found the end zone again on the ensuing possession from the Wildcats’ 6-yard line.  The Aggies extended their lead to 21-7.

With 7:33 remaining before intermission the Wildcats orchestrated a 15-play drive that began at their own 22-yard line. However, a run up the shoot was stuffed by the Aggies on fourth-and-goal from the 2-yard line.

After a 34-yard scramble, McNeal had the Wildcats set up nice and pretty at the Aggies’ 21-yard line coming out of the half. As the momentum seemed to be headed in the favor of the home team, a pass was picked off by a Sylacauga defender to stall the drive.

The Aggies capitalized three plays later with 59-yard touchdown run off an option pitch. Opportunities were fading as the Wildcats trailed 28-7.

Williams would add to the Shelby County tally late in the third with a 32-yard scoring scamper. The Aggies then padded their lead with a 73-yard touchdown toss one play later to lead 34-14.

In the fourth quarter, a Sylacauga running back found the end zone from the Wildcats’ 24-yard line with a successful 2-point conversion. Williams added another score for the Wildcats with a 12-yard run.

The Shelby County running game was on point Friday night.  McNeal, Williams and Brent Wooley ran the ball to the tune of 421 yards rushing.  The Wildcats’ offensive line paved the way.

McNeal finished the night with 145 yards on the ground and one score. Williams ended the game with 213 rushing yards and two touchdowns.  Wooley racked up 63 yards.

The Shelby County defense gave up 415 offensive yards in the loss.