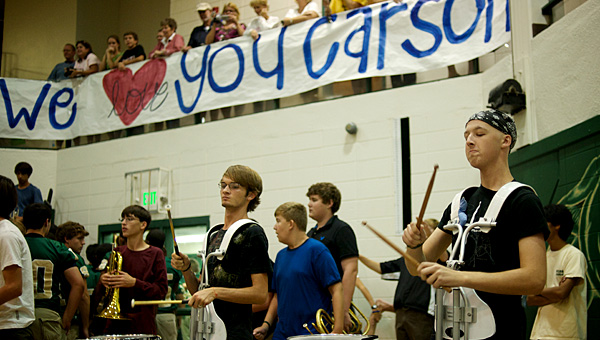 PHS student Carson Sumpter, far right, who was recently diagnosed with cancer, drums during a pep rally before the Panthers' game against Thompson. (Reporter Photo/Jon Goering)

PELHAM — As Carson Sumpter walked to the middle of the Pelham High School gym, the cheers — already near-deafening — got even louder.

Behind him, a huge banner read, “We love you Carson!”

It was the middle of the Pelham High School pep rally only hours before their football team, the Panthers, would go on to a 10-7 win over heated rival Thompson High School. However, for this moment, the cheers weren’t celebrating football; rather, the cheers were for Sumpter alone — a junior, a drummer in the school marching band and a bone cancer patient.

During the pep rally, Sumpter received a spirit stick signed in green and gold ink by all the other members of the junior class. He raised it to the crowd, smiling, and then motioned for the band to strike up a song — sending the crowd into cheers of “PHS! PHS! PHS!” 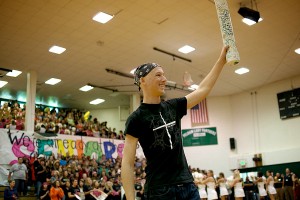 Carson Sumpter displays his spirit stick as his classmates cheer him on. (Reporter Photo/Jon Goering)

After the pep rally, as Sumpter walked to the bandroom, he was constantly stopped by a stream of people offering hugs and quick words. “There’s so many people,” he said.

Sumpter found out he had cancer three months ago, when his leg started hurting. His doctor found the cancer, and he began chemotherapy almost immediately. He’s been through four rounds, with two more scheduled.

“It’s going great. I feel great,” he said. “(Drumming) is what drives me and keeps me going. I have to have stuff to keep me going and keep me motivated. I’ve got to keep going and keep my life normal.”

In the band, Sumpter carries the quads, which weigh 55 pounds. Although he has to be careful not to put too much pressure on his body, he said he has been able to handle the weight as long as he takes care of himself otherwise.

Drumming isn’t Carson’s only connection with music, however. He also writes and sings his own songs, and he’s working towards a career performing music.

“It’s my way of expressing myself,” he said. “I’m writing more as I’ve gone along. I’m trying to use the cancer as a catalyst to start my career in music.”

Students at Pelham High School have raised $3,700 to help Sumpter’s family while dealing with the cancer.

“The support’s completely overwhelming,” he said. “I get calls and e-mails all the time. Aside from drumming, it’s what motivates me.”

Sumpter’s music can be found at his MySpace profile at Myspace.com/carsonsumpter.

Many members of Vincent's marching band will travel to Washington D.C. to play in the 2011 National Festival of the... read more