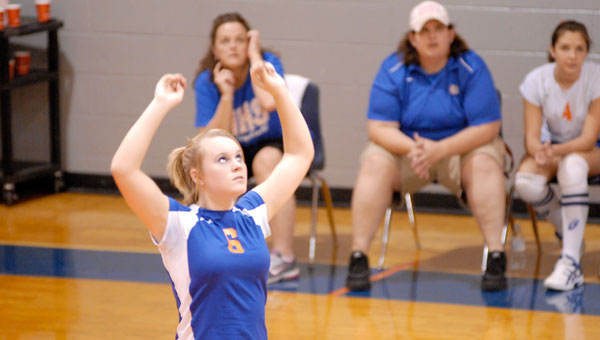 Montevallo High School senior Amber Cardwell recorded an unassisted kill to close out her night before heading to the bench to let reserves finish off a sweep of Hale County as the Bulldogs captured the Alabama High School Athletic Association Class 3A, Area 7 tournament championship Oct. 11.

Cardwell has bigger plans in store, beginning with a Class 3A region tournament Oct. 16. Cardwell knows an area tournament title is only the beginning of a path toward the Class 3A Elite Eight at the end of the month.

Cardwell plans to cap her high school volleyball career at the same place her freshman season ended in 2007 — the Pelham Civic Complex.

“I just want to get back there before I graduate,” Cardwell said.

The Bulldogs’ middle attacker added a team-high 24 digs and three blocks in the championship match to earn the tournament’s most valuable player award. 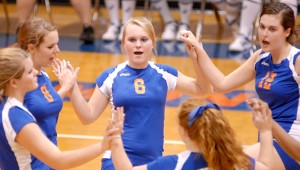 The Bulldogs (19-6) coasted to a 25-12 win in the first game and started off the second game with a 4-0 serving run by Anderson. Montevallo struggled in the remainder of the second game and held on for a 25-20 win.

Cardwell helped the Bulldogs regain their focus as they sealed the match with a 25-15 win in the third game.

Montevallo coach Tena Niven said the Bulldogs can’t lose their focus if they hope to accomplish their goals, which include advancing to the sub-state round by finishing in the top four in the region tournament Saturday.

The Bulldogs will face Central-Coosa in the quarterfinals of the region tournament at 11:15 a.m at Marbury High School. Semifinals are scheduled for 1:30 p.m. The consolation game will start at 2:45 p.m. and the region final is set for 4 p.m.

“Our goal right now is to get better every time we go out and play,” Niven said. “We peaked early in the season and we’ve got to get back to where we were. We’ve got to quit playing to our competition and just worry about our side of the net.”

Indian Springs School sophomore Ambria Hardy spikes the ball in a sweep of Leeds in the Class 3A, Area 8... read more