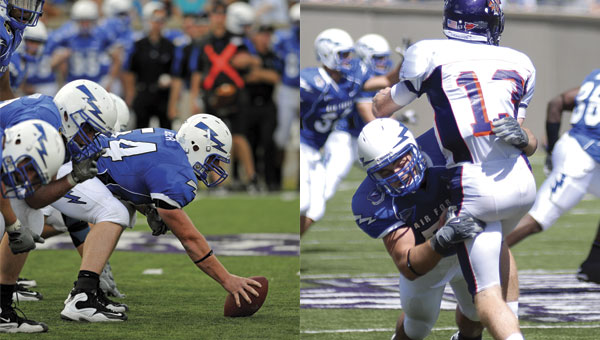 The two, however, are more than just teammates.

The newly formed friendship may be hard to believe, considering the two former Shelby County standouts were singing a different tune about each other in high school just three years ago.

Payne attended Spain Park High School, where he was a two-year starter at defensive end for the Jaguars before graduating in May 2008. Hester started for three years on the offensive line for Oak Mountain High School from 2005-2007, and graduated in May 2008 as well.

Competition in the same region along with close proximity — the high schools are separated by approximately 7 miles — made for a natural rivalry.

“We didn’t get along too well in high school,” Hester said.

“We had a bitter rivalry,” Payne said. “I didn’t care for him much.”

Payne received offers from Navy, Arkansas State and Wofford, and the Falcons joined the mix following a visit from Air Force offensive line coach Clay Hendrix, who offered Payne a scholarship toward the end of his senior season.

Payne visited the school in Colorado Springs, Colo., in January 2008, and he was hooked.

“It seemed like too good of an opportunity to pass up,” Payne said.

Hester’s path to the Air Force Academy wasn’t as conventional.

An avid Alabama fan growing up, Hester wanted to continue his football career at the Capstone. However, an offer never came from the Crimson Tide. After receiving little interest from colleges, Hester’s mother mentioned the Air Force Academy to him.

“I didn’t know much about a service academy,” Hester said. “I’d never really heard of it.”

Nonetheless, Hester decided to check it out.

“I got out here and just realized it was a great opportunity,” Hester said. “It looked like a lot of fun.”

“When we first got here, (Hendrix) said, ‘Coach, we’ve got to recruit Alabama,’” Calhoun said. “You can find areas where you can find good academics and where football is really important to them. It’s just a great, great state.”

Hester and Payne joined the Air Force football team in the fall of 2008.

The two quickly realized they were in for a college experience that was far from normal.

“You don’t have a lot of free time,” Hester said. “You have a real hectic schedule that puts a lot of pressure on you. You’re told what to do, and you have to earn more privileges.”

Hester is currently enjoying one of those privileges, as the junior has finally been allowed to have a car — a 2005 Chevy Tahoe — on campus this year.

“You’re not allowed to have a car your freshman and sophomore years,” he said.

“You learn quick how to prioritize your time,” Payne said. “We don’t lack structure. It’s not your typical college experience, but I love getting to play football.”

Not only did it take Payne and Hester some time to adjust to college life at a service academy, but the newcomers also had to catch up to the speed of the college game.

“You have to do everything that much faster,” Payne said.

“After the first fall, I felt like I was a couple steps behind,” Hester said. “It was a totally different ballgame.”

After playing together on the Falcon junior varsity team as freshmen, both players got their feet wet at the varsity level as backups in 2009. Hester saw action in four games and Payne played in one contest.

The lack of playing time was an adjustment for both.

“In high school, you’re one of the top guys. Out here, you’re nobody,” Hester said. “You’re just trying to survive.”

Payne and Hester survived long enough to earn starting jobs this season as juniors.  Calhoun said the first-year starters have been key cogs in helping the Falcons get off to a 5-1 start to go with a No. 23 national ranking.

“They’re lean, but they’re strong,” Calhoun said. “They use their hands well and have good feet. When it comes to just being able to function and operate and play with some spark, these guys are good now. They’re darn good players.”

Payne has tallied 23 tackles, one sack and is tied for third on the team with three tackles for loss at defensive end.

Meanwhile, Hester, a center, has anchored an offensive line that has paved the way for the nation’s No. 1 rushing offense, which averages 352.6 yards per game in the Falcons’ triple-option attack.

While the two players are firmly entrenched in the Falcons’ starting lineup, life after college isn’t as certain.

Their college careers will come to an end after next season, and Hester is hoping for a career in acquisitions or contracting while Payne wants a shot with a team in the National Football League.

Regardless of what the future holds, Hester and Payne believe their experiences at the service academy will help prepare them for the challenges.

“This puts you in leadership positions,” Hester said. “We were told that this will help us in the future.”