Family business all fun and games 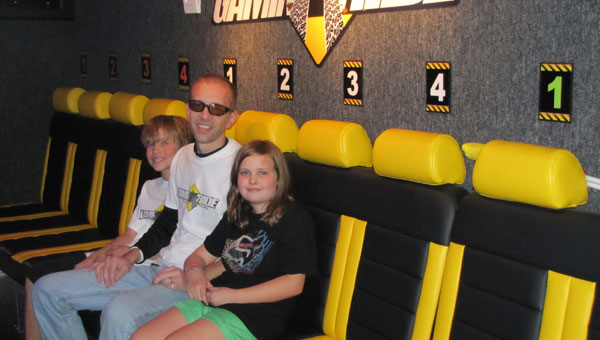 HELENA — Last year Helena resident Jeff Rozycki was driving with his wife to pick up their kids from their grandparents’ house when the unthinkable happened.  A large piece of a tractor brake drum smashed through the windshield and struck Rozycki in the face. Doctors said it was a miracle he survived.

Now after seven surgeries and a year of recovery, Rozycki has a new perspective on life that includes a franchise business guaranteed to bring fun and laughter to his family and families served in Shelby County.

Rozycki opened a Gamin’ Ride franchise that is based out of his home in Helena but can travel anywhere within a 60 mile radius to host birthday parties, corporate events, fundraisers and movie nights.

Gamin’ Ride is a mobile indoor-outdoor entertainment theater featuring the latest video games and lighting and sound technology, Rozycki said. The enclosed trailer includes four large HDTVs inside and two HDTVs outside where party guests can watch movies or play Wii, Playstation 3 or Xbox 360. Inside the game theater are 12 custom leather seats that vibrate with motion in the game or movie.

Rozycki said a machine inside the theater releases scents associated with the game. If a group is playing a baseball game, they can smell popcorn or fresh cut grass.

“The whole experience is like something they’ve never had before,” he said. “It’s not just playing video games.”

Along with the game theater, Gamin’ Ride offers packages that can include outdoor laser tag, sumo wrestling and bumper balls.

“There’s no limit to the number of people we can entertain,” Rozycki said.

Rozycki said a “game guru” leads the groups in the games and makes sure everyone is entertained. Currently, Rozycki works most the parties on his own with the help of his two children.

“We engage all the party guests,” he said. “We’re not just going to show up, turn the games on and let them play. I’ve always been a big kid. At all the birthday parties, I run around with the kids anyway.”

Rozycki’s game theater is the only Gamin’ Ride franchise in Alabama and is the only one of its kind. He said he was inspired to open the business because of its originality.

“So far it has been well received in the area and it’s something we needed in town, some different options,” he said.

Rozycki still works full-time as an electric engineer but said the new business has given him more options after his accident.

“When the accident happened, I really wasn’t sure I’d be able to return back to that kind of work,” he said. “It’s weird, in a lot of people’s minds, they think this is the worst time to take on a new business. But it’s also the best time because it distracts me from what’s going on and keeps me busy.

“We’ve been so blessed through the whole thing,” he said. “We’re so grateful to just be alive.”

For more information on Gamin’ Ride or to book a party, visit Gaminride.com.