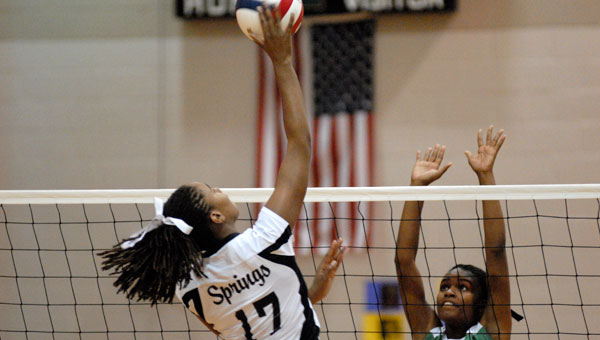 Indian Springs improved to 14-10 overall with the win and advances to a Class 3A region tournament Oct. 16 at a site to be determined.

“The main thing we’ve been focusing on is aggressive serving. That was one of the biggest pushes we had tonight,” Indian Springs coach Christina Tetzlaff  said. “Keeping that momentum on our serves was definitely the key to our victory tonight.”

After claiming the first two sets of the match, Indian Springs held a one-point lead at 11-10 early in the third set. Indian Springs went on a 14-5 run to put away Leeds, who defeated B.B. Comer earlier in the day to advance to the championship game of the three-team tournament.

Indian Springs will face Sipsey Valley (5-17) in the quarterfinals at the region tournament Oct. 16 at 11:15 a.m. at Marbury High School. Semifinals are scheduled for 1:30 p.m. The consolation game will start at 2:45 p.m. and the region final is set for 4 p.m.

The top four teams in the eight-team tournament advance to the sub-state round of the Class 3A playoffs.