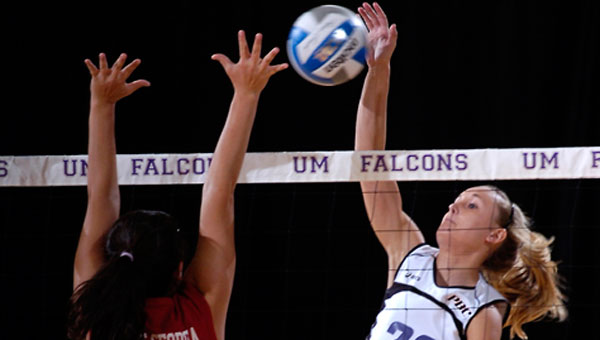 University of Montevallo freshman Taylor Chapman was named the Peach Belt Conference's Player of the Week for the second consecutive week following a season-high 29 kills in a win Oct. 9 over Anderson University. (Contributed)

Montevallo was led by junior setter Anna Garrison, who led the team in assists and digs and picked up her 11th double-double of the season. Garrison finished with 36 assists and 17 digs.

Freshman Taylor Chapman led the Falcons with 12 kills and dug up seven balls. Chapman claimed the Peach Belt Conference’s Player of the Week award for the second consecutive week.

Garrison chipped in a team-high 51 assists. Ati added 14 kills and three blocks. Dowd finished with 10 kills and a team-high 18 digs.

Wilson and Jessica Guidry finished with 16 digs each. Virginia Clay led the Falcons with four blocks.

Garrison chipped in a team-high 33 assists to go along with six digs.

The University of Montevallo men’s soccer team suffered its first loss in the same week it achieved its highest ranking in school history in the National Soccer Coaches Association of America Division II poll.

The Falcons, who moved up to No. 2 in the latest poll, fell 3-0 to No. 24 Clayton State University in a Peach Belt Conference match Oct. 6.

Clayton State scored a goal in each half to defeat Montevallo.

The Falcons picked up their tenth win of the season with a 2-0 victory on the road Oct. 9 at the University of South Carolina-Aiken.

Senior defender Austin McIntosh’s first goal of the season proved to be the game-winner just 19:27 into the game. McIntosh received a quick pass from senior Milan Pualic in the box and shot it past the keeper for the third goal of his career and his first in the 2010 season.

Montevallo’s second goal came in the second half with just over eight minutes to play as Pualic beat the defense and scored his sixth goal of the season.

Ledgeway kept the Pacers off the board as he made four saves to pick up his fourth shutout of the season.

Falcons finish week with a win and a tie

The University of Montevallo women’s soccer team picked up its first Peach Belt Conference victory of the season as the Falcons defeated the Clayton State University 4-1 in a conference match Oct. 6.

Freshman Asgerdur Palsdottir scored the game-winning goal just 16:33 into the first half.

Montevallo opened the scoring just 7:39 into the game as freshman Christine Prince received a pass from junior Michaela Moertzsch and dribbled her way into the box and shot the ball, which knocked off the crossbar and into the net.

Palsdottir then scored the game winner as she took a pass from sophomore Nicola Stolworthy and shot the ball into the upper corner to give Montevallo a 2-0 lead.

The Lakers scored their lone goal of the game with just under five minutes to play in the first half.

In the second half, the Falcons scored their first goal just 10 minutes in as freshman Emilie Morrow received a pass from sophomore Paige Scott and shot the ball from 25 yards out to beat the keeper and give the Falcons a 3-1 lead. The final goal of the game came in the 72nd minute as Prince crossed the ball into the box and Stolworthy finished with a strong kick past the keeper.

Sophomore goalkeeper Alyssa Maxwell made two saves in the game to push her record to 3-6 on the season.

The Montevallo women finished fourth in the women’s 5K race.

The Falcons were one of two Peach Belt Conference schools at the race. Montevallo finished ahead of Peach Belt foe Georgia Southwestern State University, which finished ninth in the race.

The Montevallo men finished eighth in the men’s 8K race.

Montevallo was one of two Peach Belt Conference schools at the race. Clayton State University finished second at the event.

The Falcons top runner was freshman Mark McDonald, who finished 33rd overall with a time of 29:21.18.

Montevallo finished ahead of Tuskegee University, Clark Atlanta University and Stillman College. The University of West Alabama won the race, followed by CSU and Jacksonville State.

University of Montevallo senior Emily GIbson led the Falcons to a two-way tie for fourth place at the Southern Shootout hosted Oct. 10-11 by Birmingham-Southern College at Highland Park Golf Course in Birmingham.

The Falcons carded a team score of 631, which was 30 strokes behind tournament winner Columbus State University.

Gibson finished third overall in individual standings with her 4-over par 144. Gibson shot a 2-over par 72 in each of the rounds.

Emma Breen of Montevallo finished in a two-way tie for 23rd overall in individual standings with her 19-over par 159.