WWII vet says God and singing helped him through 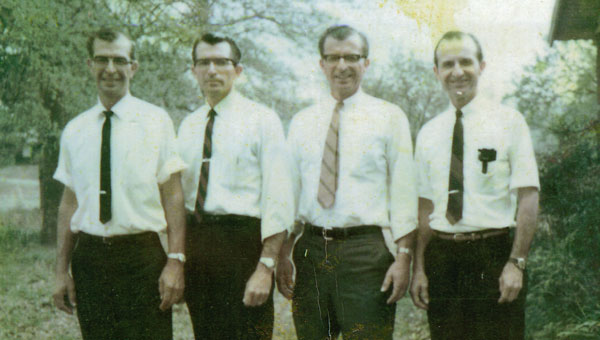 The Shaw brothers sang for more than 50 years, first as the Legionnaires quartet, then as the Key Masters. From left, Bill Shaw, Lane Shaw, Wendell Shaw and Hugh Shaw.

“With bombs falling, shells going off, I shouldn’t have come out of Germany alive,” said 88-year-old Wendell Shaw. “I don’t know why the Lord let me live through it, but he had a reason.”

Shaw spent two years in France and Germany during World War II. “Then I almost got my foot blown off in Germany,” he said, indicating a foot on the footrest of his motorized wheelchair.

“But I could walk on it,” he said, and laughed, adding, “When I could still walk.”

Shaw was born near where he lives now in the Chelsea/Westover area.

“I grew up during the depression and my daddy never had $3 in his pocket at once,” he said. “We all loved each other and didn’t know we were poor.”

“We wore patched overalls and went barefoot. Everybody was in the same shape. We raised what we ate and ate what we raised.”

He said they had plenty of meat, milk, eggs, vegetables, sorghum and sugar cane.

“We chopped cotton, loaded and hauled logs, worked at anything we could.”

Shaw and wife Louise Adams had two sons, who were partially deaf, he said. So, they moved to Talladega where the boys could attend the school for the deaf. They moved back to the home place in 1968.

“There were just 11 of us to start with,” he said, “but we got out and worked and built it up.

“I had three brothers — Hugh, Lane and Bill — and we were close all our lives. We helped each other in our spiritual lives. And singing played a big part in it.”

The brothers formed a quartet around 1946, which was known as the Legionnaires, and in 1952 became the Key Masters.

Off and on through the years, other singers joined the group. For several years, Elvis Walton sang with them.

“But for over 55 years, until about six years ago, at least one of the Shaws sang with the group,” Shaw said.

Shaw’s wife died almost six years ago. Heart attacks took his brothers Hugh and Lane. Wendell himself had a heart attack in 1990.

“And the Lord has helped me through all of it,” he said.

“There have been some rough times, but I‘ve had a good life. I think of every day the Lord lets me live as a bonus.”

Chelsea High School Principal Jay Peoples displays one of the signs being put up along roads near schools in the... read more