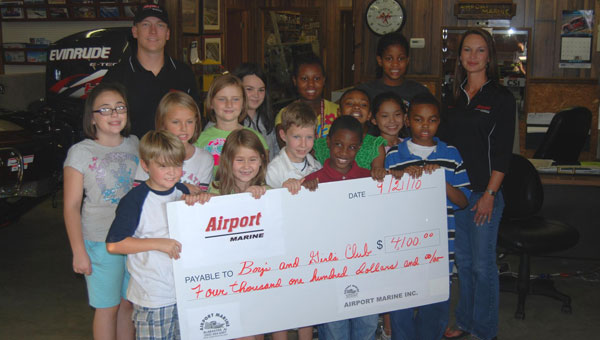 Tim Boutwell and Amy Hollis of Airport Marine giving a donation check to several children from the Montevallo Boys and Girls Club.

MONTEVALLO — Children from the Montevallo Boys and Girls Club got a surprise last month when they received their first fundraising check from an outside organization for $4,100.

Airport Marine in Alabaster donated the proceeds from a bass fishing tournament to the club, said club director Freda Shivers.

The tournament was held at Lay Lake in May and the club received a call in September saying they had a check waiting for them, she said. Shivers took a dozen children from the club to Alabaster to pick up the check.
“We didn’t know how much it would be,” she said. “ I told the kids ‘It could be $10, it could be $100.’ When we got there one of the kids saw the big check first and came running to tell me ‘It’s for $4,000!’ We were very surprised.”

Kim Turner, vice president of development for the Boys and Girls Club of Central Alabama, said Airport Marine gives to the organization every year. This year they specifically wanted to donate to the Montevallo club since it’s the only one in Shelby County.

The check was the Montevallo club’s first donation from an outside fundraiser, Turner said. She said the money will help with general operation costs for the after school programs, including homework help, character development and healthy eating habits.

This fall, donations will help with school supplies and the upcoming Christmas season.

“We’re always looking for ways to help out our families,” she said. “It makes it much easier for them.”