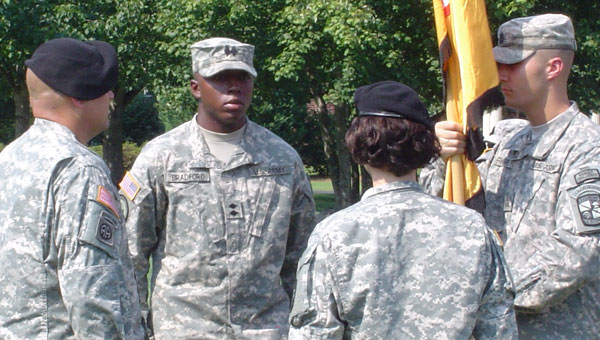 Cadet Bradford is a senior who is majoring in broadcast journalism, and will be commissioned in May 2011 as a 2nd Lt. in the United States Army. He is a 2007 graduate of Vincent Middle High School, where he was a member of the Junior ROTC program for all four years, and served as the drill team commander. Bradford is the son of Ms. Mary A. Bradford of Harpersville. Above, Cadet Lt. Col. Richard White is passing the battalion colors from the outgoing commander Lt. Brown to the incoming commander, Cadet Lt. Col. Bradford.

On Aug. 14, Auburn University Harrison School of Pharmacy held a White Coat Ceremony to induct the Class of 2014.... read more