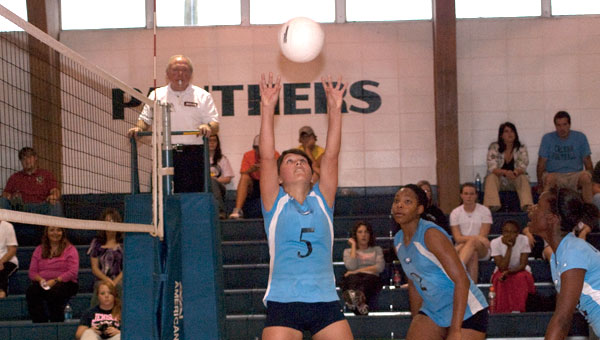 After dropping the first two games, Calera rallied to win the third game before coming up short in the fourth game.

“We’ve really been struggling with our mental game and momentum,” Lewis said. “We decided we weren’t going to go out in three.”

The Eagles (13-13) advanced to a Class 4A region tournament Oct. 16 by finishing runner-up in the area tournament. Calera will face Oak Grove in the region tournament quarterfinals at 10 a.m. at Jemison High School. The semifinals are scheduled for 1:30 p.m. The consolation match will start at 2:45 p.m. and the championship match is set for 4 p.m.

Junior setter Kellie Rasmussen, who was named the Class 4A, Area 6 tournament’s most valuable player, led the Eagles with 33 assists in the championship match.

“(Kellie) is one of those players that I’ve never seen give less than 100 percent, whether it’s volleyball or in the classroom,” Lewis said.

La’Jacqueline Morgan contributed 12 kills. Elizabeth Rhinehart, who was also named to the all-tournament team, racked up a team-high 16 digs.

Oak Mountain High School senior Chelsea Payne sets up a teammate for a kill in the Eagles' win over Hoover... read more