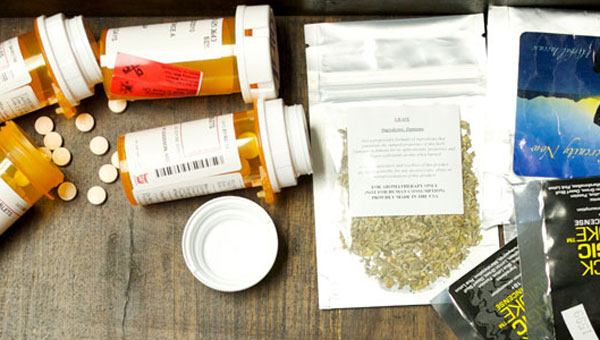 Sometimes teenagers are willing to try anything, a fact that can hit a little too close to home for Jennifer Campisi, a counselor at the Shelby County Alternative School.

Recently, Campisi’s been hearing about students partaking in “cocktail parties,” which, despite the name, aren’t intended to show off martinis and cosmopolitans.

Rather, participants at these parties bring whatever prescription drugs they have on hand, pour them all into a large bowl, mix them up and down a handful.

“It’s hard for me to understand why kids would put a bunch of pills in a bowl and pull them out,” Campisi said. “I’ve noticed more and heard more about prescription pills in the past few years.”

The pills she’s seeing the most are Lortabs and Klonopin.

“So many kids are prescribed Adderall, so they have it and they give it or sell it to their friends,” Miler said.

He said he’s seeing teenagers find new ways to use prescription pills to get more and more intense highs. Many prescription pills are time-release pills, intended to be taken orally at certain times during the day. Instead, teens are crushing the pills and snorting them so the chemicals can go straight into the bloodstream.

“From what I understand, it’s a high that’s absolutely incredible,” Miller said.

Dorann Tanner, a social worker for Shelby County Schools, knows the lengths to which some teenagers are willing to go to get high. Yet she is still amazed at what teenagers will try, such as “salvia,” also known as “Serenity” and “fake weed,” which is sold in small, silver packages, typically with stickers on the package.

“It’s sold as incense, and it says on the package, ‘not for human consumption,’ but that’s just a way to sell it,” Tanner said. “The kids know what it is.”

“It doesn’t have the smell of marijuana. If your kids come home smelling like vanilla, you’re not going to think anything of it,” Tanner said.

However, no one knows what the long-term effects of salvia are. Short-term effects include headaches, nausea, heart palpitations, hallucinations and paranoia, as well as a fast, intense high.

“You can get high off it, and you can get addicted to it,” Tanner said. “We’ve had kids get help for ‘serenity addiction.’”

While salvia was legally sold for some time, it is now illegal to sell in the state of Alabama. That doesn’t stop some vendors, though, as Miller found out when he discovered some of the teens he works with were still using salvia.

Miller drove through Calera and Montevallo, stopping at five gas stations in the area to see if they were selling salvia. Of the five, four were selling the product. Three had salvia under the counter, and one had salvia packages taped in the windows.

“The store owners know good and well what they’re selling,” he said. “What the public needs to do is go into every store and say, ‘I will not shop with you until you stop selling crap like this.’”

Tanner said another growing trend in the school system is sexting, or sexual text messaging. Some students are sending graphic text messages or photo messages to each other, both inside and outside school walls.

“It used to be, back in the day, you would just flash your boyfriend in the bushes. Now you send him a picture,” Tanner said.

Campisi said she has seen a lot of sexting cases, especially since sexting can lead to an alternative school placement if students are caught in the act. She said teens don’t always understand their actions now can have consequences down the road.

“They need to understand that those pictures could be floating out there for the rest of their lives,” she said. “The scariest part is they put so much trust into each other. They’re just so wrapped up in what everybody else is thinking.”

Tanner agreed, saying teenagers’ brains aren’t yet developed enough to think of the long-term consequences. Because of that, parents must act to remind them.

“Check your kid’s cell phone. Lots of parents think, ‘My kid wouldn’t do that.’ Yeah, they would. Your kid thinks just like every other teenager,” Tanner said. “Kids just get caught up thinking, ‘I’m going to send this picture to my boyfriend, and he won’t show anybody.’ Then they do.”

Sexts can also be illegal — especially if at least one participant is underage. Explicit photo messages of children under 16 can be considered child pornography.

Depending on the contents of sexts, sometimes school officials must call the Department of Human Resources and law enforcement to report them. Families of sexting participants can also decide to press charges against other teenagers distributing graphic photos.

Tanner said sexting is becoming a widespread problem in the school system, and parents must be the first line of defense.

“Parents need to be involved. I think that’s the key. (Teenagers) act like they’re not listening, but they are,” she said. “(Here’s) what I would drill into my children’s heads: ‘Don’t take a picture of yourself and send it to anybody. Ever. I don’t care what they say.’”

These days, it seems every teenager has a Facebook account or a MySpace account, or even both. While those social networks can be a way to open up the world, they can also create new hazards for teens, including cyber-bullying.

Through cyber-bullying, students can harass other students without ever walking up to them in the school hallways.

Tanner said the best way for parents to make sure their teens aren’t being bullied — or doing the bullying — is to constantly check their Facebook or MySpace profiles.

She also said teens can make themselves targets unknowingly by posting too much information.

“They’ll post things about their personal life, again, not thinking, that can come back to haunt them,” Tanner said.

Campisi said parents often blind themselves to the truth about their children.

“You’re going to have parents that are willing to cooperate and do whatever they need to do. Then you’ll have parents that will say, ‘My child would never do that,’” Campisi said. “It’s about trying to get parents involved and making them accountable as well.”

She said cyber-bullying, left unchecked, can lead to tragic consequences.

“Around the country, kids are committing suicide and you’re finding out it’s because of cyber-bullying,” Campisi said.

According to Lt. Chris George, commander of the Shelby County Drug Task Force, the best way — and many times, the only way — to stop teens from getting involved with these trends is for parents to be proactive.

“Parents have every right — in fact, they have a duty — to get into their kids’ business,” George said. “The number one way to stop it is the parents.”

Campisi said she tries to let teens know she’s there to listen, not scold. But she’s also there to make them think through their choices.

She said many times, such teens don’t have positive role models in their lives. Some of them see drugs as normal because their parents do drugs.

“A lot of them feel like they don’t have anything worth fighting for,” Campisi said.

George said when teenagers don’t have parents to be role models, others must step up.

“Parents, the church, family need to be the buffer between a kid and the law,” he said.

For more information about school trends to watch for, parents can visit the Shelby County Schools website at Shelbyed.k12.al.us/parentresources/student_serv/trends.htm.

Parents can also check out the Shelby County Drug Free Coalition at Familyconnection-inc.org/coalition/.

PHS student Carson Sumpter, far right, who was recently diagnosed with cancer, drums during a pep rally before the Panthers'... read more