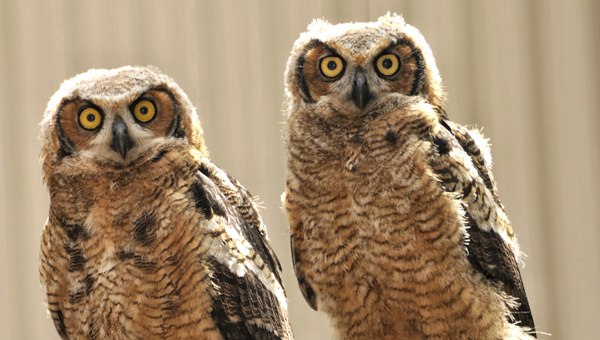 One had been attacked by a dog, one had likely been hit by a car and another was brought to the center from another rescue facility not equipped to properly care for the animal. All three had been separated from their parents before they were able to fly on their own.

“The first one arrived April 12, and it had several puncture wounds, most likely from a dog attack,” said Beth Bloomfield, executive director of the Alabama Wildlife Center. “The second one came to us from Tennessee, because the group didn’t have the right size cage for an animal this large.

“The third one came to us on May 19. It was found on the side of the road in Huntsville, and we suspect it was hit by a car,” Bloomfield added. “It was an older baby, but it was separated from its parents.”

After administering medical treatment to the owls, the Wildlife Center had to address a potentially life-threatening problem plaguing all three animals.

Because they were separated from their parents at an early age, the juvenile owls had not yet learned to hunt on their own.

“Eventually, we were able to house all three of the owls together in the same enclosure,” Bloomfield said. “We were able to put them in there with two other adult owls, and the juveniles were able to learn to hunt on their own.

“The owls are just like any child. They have to have an adult to learn from,” Bloomfield added. “They spent at least three months learning to hunt and fly.”

Because the birds have demonstrated they are able to hunt and catch live prey while at the Wildlife Center, center employees will release the three owls into the Turkey Creek Nature Preserve in Pinson at 2 p.m. Oct. 13. The Alabama Forever Wild organization purchased the 462-acre preserve in 2004, and the site will offer an ideal environment for the owls once they are released, Bloomfield said.

The birds arrived at the Alabama Wildlife Center before they were able to fly, so their release will also serve as their first free flight.

“It’s just an amazing experience to watch them make their first free flight,” Bloomfield said. “They arrived to us before they were able to fly on their own.

“After so many months of care and labor on our part, it’s incredibly gratifying to see them take flight as they were intended to,” Bloomfield added.

Tim Boutwell and Amy Hollis of Airport Marine giving a donation check to several children from the Montevallo Boys and... read more