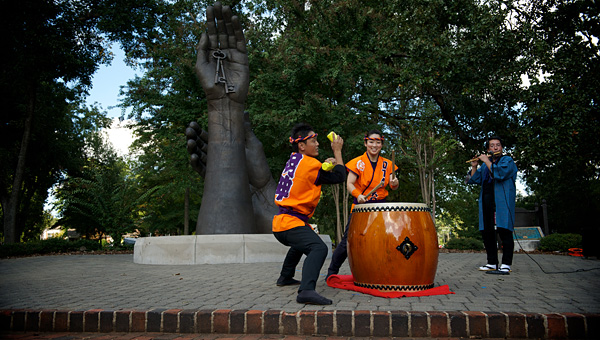 MONTEVALLO — The 400-year-old sound of Japanese taiko drums beat across the campus of the University of Montevallo Oct. 13. Eight special guests from the city of Montevallo’s sister city, Echizen Town, Japan, played the drums and performed a traditional dance on the university’s courtyard for students, faculty and the community.

Kazuo Moriya, director of the international program for the university, said the group’s performance was part of their six-day visit to Montevallo. The Japanese Consul General and the chairman of the town counsel in Echizen Town travelled with the drumming group.

Kazushige Tomita, a founding member of the drum team, said this trip was his first time to come to America. 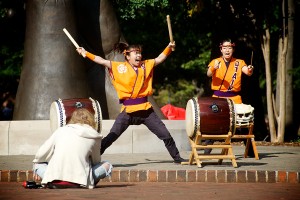 “It broke the image I had about America,” he said through a translator. “It’s such a wonderful place.”

Moriya said the university’s relationship with Echizen Town has benefited UM students’ learning of cultural music. In July, two music students had the opportunity to visit Japan and play for them. Now the drumming group is returning the favor.

“It goes without saying that in Montevallo and in America, we’re not exposed to very much traditional, formal Japanese music,” Moriya said. “It’s a great experience for the students to learn from.”

Tomita said students don’t have to know the history of Japan or the tradition of the drums to understand their meaning. In that way, the drums cross all language and cultural barriers.

“The rhythm of the taiko drum is very similar to that of the heart beat,” he said. “For those listening, it’s a heart to heart thing. They may not be able to understand but they can still feel the music and the Japanese beat.”

Tomita said he thinks both Japanese and Americans benefited from the trip.

“It’s very important for the young generation of people to know about other countries and other cultures around the world,” he said. “I feel honored to be a part of this cultural exchange.”