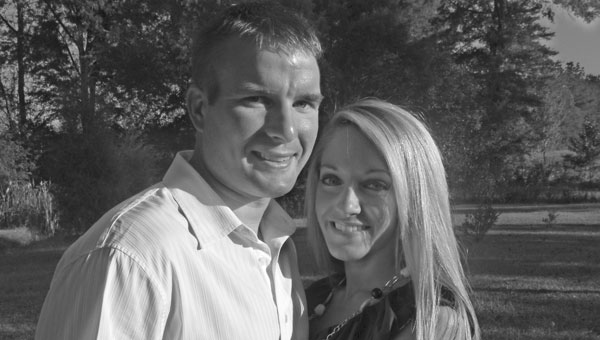 Mr. and Mrs. Joe and Maria Tidmore, of Columbiana, are pleased to announce the engagement of their daughter, Marlena K. Tidmore, to J. Cory Hamrick of Niceville, Fla., the son of Mr. John Hamrick of Niceville, Fla. and Ms. Sharon Robbins of Parrish. The bride-elect is the granddaughter of Mr. and Mrs. Joe and Brenda Tidmore of Columbiana, Mr. and Mrs. Kenneth and Christy Arden of Birmingham, and the late Mr. Daniel McClain of Pelham.

Marlena is a 2006 graduate of Shelby Academy in Montevallo. She attends Auburn University and will graduate in May 2011 with undergraduate degrees in accountancy and human resource management. Marlena is currently employed by Auburn University as and Executive Suite Ambassador and plans to intern next spring at Lovoy, Summerville and Shelton, P.C. in Birmingham.

Cory is a 1998 graduate of Walker High School in Jasper. He earned his undergraduate degree in 2002 from Birmingham-Southern College in Birmingham where he received a Bachelor of Science in Psychology. He was a member of the Birmingham-Southern 2001 NAIA National Championship baseball team. Cory is currently employed as the Head Baseball Coach and Social Science educator at Niceville High School in Niceville, Fla.

Their wedding will take place on June 11, 2011 at Columbiana Methodist Church. A reception will follow at Anderson Gail Farms in Shelby.