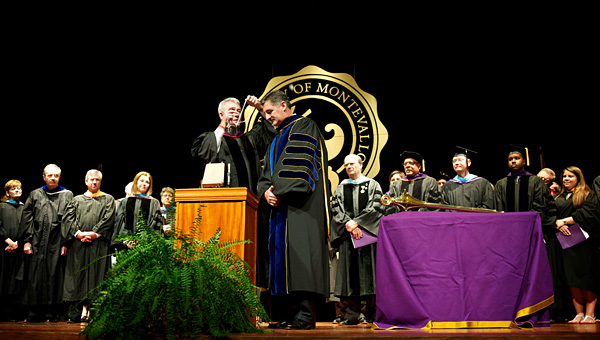 MONTEVALLO — The University of Montevallo embraced Dr. John W. Stewart III as the 15th president of the university at his inauguration ceremony Oct. 14 in Palmer Auditorium.

The ceremony coincided with the celebration of the 114th Founder’s Day and the traditional investiture of the senior class.

During the ceremony, university faculty, students and alumni welcomed Stewart into the UM family.

“We wanted to find the best person for the job and we’re delighted to have found a person with both a focus on scholarship and a broad vision of the world around us,” said Jeanetta Keller, vice chairman of the board of trustees. “Dr. Stewart clearly plans to build on Montevallo’s reputation and make it the best small university in the South.”

Montevallo Mayor Ben McCrory welcomed Stewart and his family to the community and presented Stewart with a key to the city as a symbol of the relationship between the city and university.

“This will not open the vault at City Hall or the vault at any banks around town,” he said. “It’s a ceremonial key. I hope it will unlock a bright future for the city of Montevallo and your time as president.”

During his inaugural address, Stewart said he was honored to join UM’s strong family of independent thinkers. 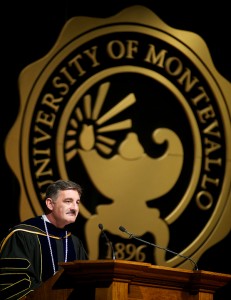 “I take up this challenge humbly to lead this university,” he said. “I hope I will do so with the character and integrity I was brought up with.”

Stewart said his plans for the university’s future include spreading the good reputation of the school’s academic value. He said he plans to increase enrollment by 500, adding $5.5 million to the university’s revenue to make up for state budget cuts.

“Yes, we’re proud to be a state institution, but we’ll be operating a little more like a private enterprise,” he said.

In the next five year, Stewart said he’d like to see the university go from 40th in its peer group to the top 20 and in ten years make it to the top ten.

“Montevallo family members know the value of the education we provide but far too few outside these walls know about it,” he said. “Now is the time for all of us to tell of our students and faculty and preach the Montevallo gospel like never before.

“Good families are supportive, but they also expect big things from one another,” he added. “Here at Montevallo, we’re going to dream big.”

Stewart said as new president, he is excited about the university’s bright future.

“I feel very privileged that I’ve been asked to lead the family,” he said. “While there is a lot of work to be done, I feel it’s a propitious moment in our history because the value of our education is going to be shared with the world. Once we accomplish that, there’s going to be students that will come to Montevallo from far and wide.”

Mr. and Mrs. Joe and Maria Tidmore, of Columbiana, are pleased to announce the engagement of their daughter, Marlena K.... read more