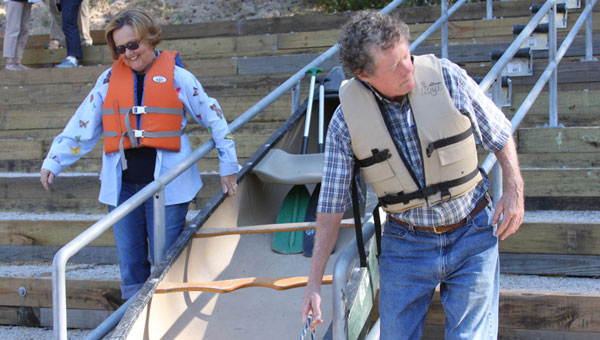 Near the county line separating Shelby County and Bibb County, the Cahaba River bends in the shape of a thumb.

“We are the thumb,” said Robert Hay, associate executive for nature for the Presbytery of Sheppards and Lapsley.

The presbytery, made up of 88 churches in the region, including one in Montevallo and one in North Shelby, has spent the last 13 years working on the ideal camping and retreat center where people can go to learn and grow spiritually, he said.

Living River is the product of that work, occupying 440 acres in Shelby and Bibb Counties.

“We needed a place for children, youth and adults to go to camp and conferences. That was the initial dream,” Hay said. “When we found this property, it’s just an incredible environmental laboratory. It fits in great with our mission for environmental education and teaching our students to be good stewards of the earth. In Genesis, God says to take care of this earth. No where has he ever taken that job away from us.”

Hay said camping is an important part of developing faith, citing Jesus’ frequent retreats into the mountains to refuel. Hay said members of the presbytery knew this facility would be important for its church members when they received the results of a survey done by their denomination.

The survey was sent to preachers, elders and lay people of the church, he said. It asked participants to select from a list of options the place where they had their most significant faith revelation.

“Fifty-two percent of preachers answered a camp or conference center,” Hay said. “Forty-one percent of elders and 39 percent of lay people said the same. That shows the significance of what happens at the camp and conference setting.”

Hay said the center will also bring members of the church together.

“I’ve been taught it takes 14 contact hours for someone to become a part of a group,”

Living River was created for churches within he presbytery but is also open to other churches and groups in the community, Hay said.

“We’re not rich enough to own a camp and conference center just for ourselves,” he said. “And we don’t want to be that selfish. We want others to use and enjoy it, too.”

On Oct. 3, Living River hosted an open house for members of the community to see and enjoy the facility. The Archie LeBron Canoe Launch that sits on the river was dedicated and opened for use for the first time.

Hay said more than 400 people attended the event, marking a turning point for the retreat center, which has been a work in progress up to this point.

The presbytery is still fundraising for the center, to build lodging and other facilities. The master plan includes lodging for 88 people, a dinning hall, a recreation hall, meeting facilities, a swimming pool and an athletic field.

In the meantime, the center is open for camping groups to enjoy the land, river and many trails. Hay said several scouting groups and student groups have already made use of the center.

For more information on Living River visit Livingriver.org or call 978-0329.