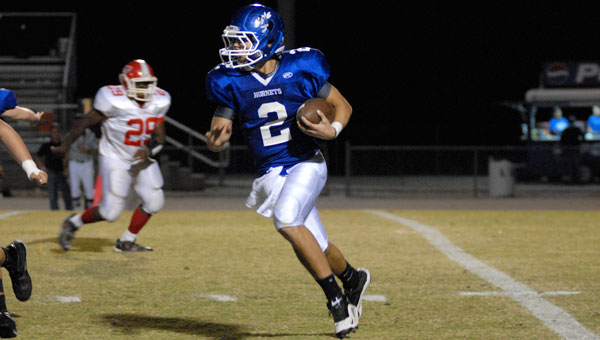 CHELSEA — Leave it to Jake Ganus to ensure Chelsea High School would be playing football beyond the regular season.

Chelsea’s junior signal-caller accounted for 416 yards and five touchdowns to lead the Hornets to a 42-14 homecoming win over Talladega High School Oct. 15.

The win locked up a spot for Chelsea (6-2 overall, 5-1 in Class 5A, Region 5) in the Alabama High School Athletic Association Class 5A state playoffs in November.

When Ganus wasn’t throwing for 161 yards and two touchdowns against the Tigers’ defense, he was running over, around and through it to the tune of 255 yards on 16 carries and three scores.

Ganus quickly got to work on the Hornets’ first possession of the game, running the ball twice for 26 yards — the last carry going for 17 yards around the right end to put the Hornets up 7-0 nearly four minutes into the contest. The score capped a six-play, 61-yard drive.

“After the first series, we saw that the blocking scheme was there all night,” Waldrop said.

“We just felt like he was reading the blocks and making the necessary cuts,” Waldrop said. “We just kept the ball in his hands.”

Ganus said it was far from a one-man show.

By the end of the first half, Chelsea held a 21-0 lead behind two Ganus scoring scampers and a 22-yard touchdown pass from Ganus to running back Julius McCall.

Ganus added another touchdown pass — a 62-yarder to wide receiver Jake Campbell with 4:39 left in the third quarter — and a touchdown run from 35 yards out to give Chelsea a 35-0 lead with 10:48 remaining in the fourth quarter.

Antwon Williams ripped off a 23-yard touchdown run for good measure with 7:12 left in the contest.

Talladega (1-7 overall, 1-5 in Class 5A, Region 5) avoided the shutout with a pair of touchdowns late in the fourth quarter, including a 35-yard touchdown pass from quarterback Will Bailey to wide receiver LaCorey Tucker.

Tucker had a big night for the Tigers in defeat, as the senior hauled in nine passes for 180 yards and a touchdown.

Bailey finished 21-of-33 for 226 yards with a touchdown and an interception.

Chelsea can clinch the No. 2 spot in Class 5A, Region 5 and host a playoff game with a win over Moody High School in its final region game Oct. 22.

“That’s just huge,” Ganus said. “That’s what you shoot for in the offseason.”