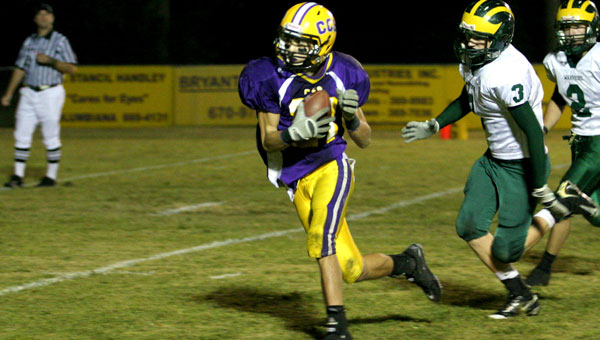 The Cornerstone Christian School football team erased a 13-point deficit at halftime to pick up a 14-13 win over Sparta Academy in an Alabama Independent Schools Association Class 1A, Region 2 contest Oct. 15.

Josh Anderson led the Chargers, as he found the end zone on a 47-yard scoring run with less than two minutes left to tie the game at 13-13.

Eric Braun booted the extra point to break the tie and seal the region win for the Chargers.

Anderson finished with 111 rushing yards and a touchdowns on 16 carries.

Sterling Riether completed 4-of-6 passes for 116 yards for a touchdown, including a 57-yard strike to Braun to set up Anderson’s final rushing touchdown.

Braun also caught a touchdown pass from Riether in the win.

The win keeps Cornerstone (4-4 overall, 2-3 in AISA Class 1A, Region 2) in contention for a playoff spot, but the Chargers must win their final region game Oct. 22 at Sumter Academy to have a chance at postseason play.

“It was a big win for us,” said Cornerstone coach Tim Smith. “It keeps us in the hunt for a playoff spot. We just have to keep winning.”

By STEVEN KILPATRICK / Staff Writer With the Alabama Independent Schools Association Class 1A, Region 2 championship on the line,... read more