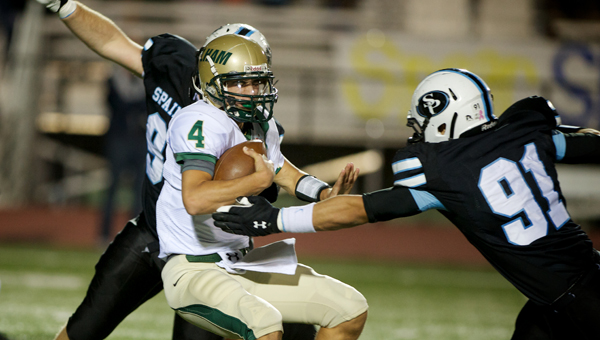 The Spain Park Jaguars secured a spot in the Class 6A state playoffs with the win, a goal the team has been working on since summer, said Spain Park interim head coach Ben Berguson.

“It wasn’t a pretty win, but I’ll take it. Our goal since summer has been to make it to the playoffs,” Berguson said. “Pelham kept putting six guys on the line, and that forced us to pass a lot. We kind of just took what they gave us.

“But we are locked into the playoffs now, and that feels awesome,” Berguson added.

“We just couldn’t get anything going on offense tonight,” Burnett said. “We felt good going in with the score at 7-3 at halftime. 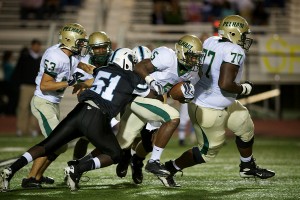 Pelham's Reed Garrett runs the ball during a play in the first half of the game against Spain Park Oct. 15. (Reporter Photo/Jon Goering)

“We just cant turn the ball over like that,” Burnett added. “But we just have to keep pressing on.”

Spain Park scored on its second possession of the game, when Zak Michael reeled in a 57-yard touchdown pass from quarterback Nick Mullens. Jake Hoffman added the extra point, putting the Jags ahead 7-0. 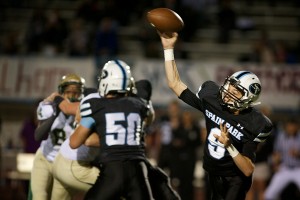 Pelham answered as time expired in the first half, when kicker Cameron Haynes connected on a 31-yard field goal.

Spain Park capped off a 76-yard drive to start the second half, when Kevron McMillan ran into the end zone from 2 yards out. Hoffman’s extra point put the home team ahead 14-3.

Haynes added three to Pelham’s score on a 27-yard field goal, bringing the game to 14-6.

The Jaguars pulled ahead in the fourth quarter on a 1-yard McMillan scoring run.

Pelham answered when Tre Maynard picked off Mullens and ran it in 28 yards to score. Haynes’ missed point-after attempt brought the score to 21-12.