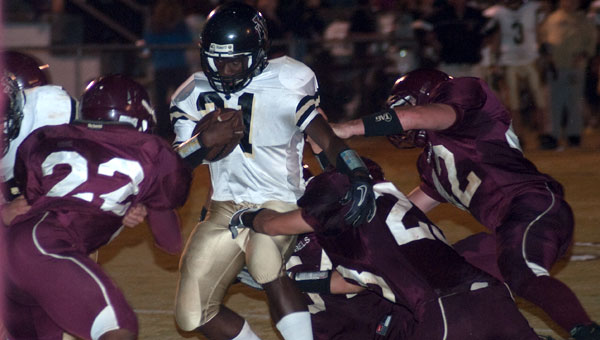 Vincent High School running back Shacorry Lilly drags a couple of Thorsby defenders with him on a rushing attempt Oct. 15 in the Yellow Jackets' 36-30 double-overtime loss. (Contributed/Stephen Dawkins)

THORSBY – Thorsby used a game-tying 87-yard drive near the end of regulation and two Andrew Farris touchdown runs in overtime periods to sneak by Vincent on Friday, 36-30 in double overtime.

Thorsby took a 14-6 lead with 3:20 remaining in the first half when Farris, Thorsby’s senior quarterback, rolled right and found senior Tanner Bush open in the end zone.

But Vincent controlled the second half with a power running game behind quarterback Damauntey Johnson and running back Rodney Groce. The Yellow Jackets (6-2, 5-1 Class 2A, Region 4) tied the game on a short pass from Johnson to ShaCorry Lilly that turned into a 70-yard touchdown play.

Johnson found Daniel Hawkins open in the end zone after a fake toss for the 2-point conversion.

The visitors took the lead on a Johnson keeper from six yards out, dragging defenders into the end zone with him with 7:54 left on the clock.

The hosts gained some momentum when Farris hit Stephen Mims on a reverse pass for 41 yards to the Vincent 31-yard line.

Farris connected with Mims again, and the receiver stretched across the goal line with less than 1 minute to play.

Farris kept it himself for the 2-point play, and the game was headed to overtime.

In what was a run all the way, Farris rolled right and scored just inside the pylon on the first play of overtime.

The QB ran up the middle for two more points, and the home fans were feeling good about their chances on Homecoming night.

But Johnson fought his way into the end zone from 10 yards out to score for Vincent. On the 2-point conversion attempt, the Rebels defense appeared to have Johnson stopped short of the goal line on fourth down during Vincent’s turn in the extra period, but he somehow managed the flip the ball to Sadarius Lawson in the end zone to bring on another overtime period.

Vincent got the ball first in the second OT, and Erick Camarillo broke up a pass attempt in the end zone on fourth down.

When the Rebels got the ball, they went back to the same play that worked so well in the first overtime, and Farris took it in again, this time for the win.

With the win, Thorsby will host a game in the first round of the state playoffs. The top two teams in each region host.

FROM STAFF REPORTS The Vincent High School volleyball team saw its 2010 season end with a loss to Cleveland in... read more