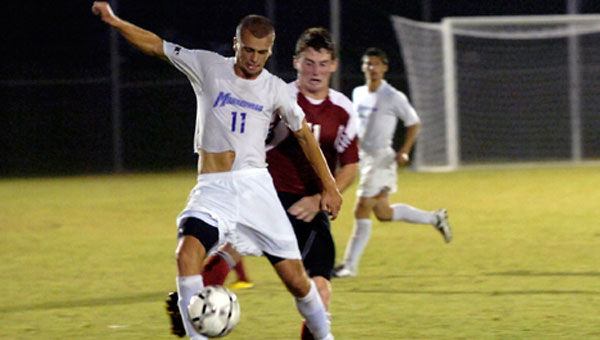 University of Montevallo senior James Steer scored the lone goal for the Falcons in a 1-0 win over Georgia Southwestern State University in a Peach Belt Conference match Oct. 16. (Contributed)

Montevallo goalkeeper Brendan Ledgeway made two saves for the Falcons (12-1-1 overall, 5-1-1 in PBC) as he picked up his fifth shutout of the season. Senior James Steer delivered the lone goal of the game as he headed in the game-winner just 20 minutes into the match for Montevallo, which is ranked No. 20 in the latest National Soccer Coaches Association of America Division II poll.

For the second match in a row, senior Alex Ghoja sent in a perfect cross that was headed in by Steer for the Falcons’ first goal. Ghoja sent in a cross and Steer used a perfectly timed run to send the ball past the keeper.

Ledgeway made the two necessary stops for the Falcons, while his Georgia Southwestern counterpart was only able to make one save.

Montevallo withstood a two-hour lightning and rain delay to down the University of West Florida 2-1 in match Oct. 12.

The Falcons and Argos played the first 33 minutes of the match before a thunderstorm caused both teams to clear the field. After a two-hour delay, the Falcons returned and withstood a steady downpour to beat the Argos.

Both of the Falcons’ goals came off the head of senior Daniel Pelletier, who scored a goal both before and after the delay.

Pelletier got the scoring started in the 15th minute as senior defender Austin McIntosh found Ghoja, who crossed the ball into the box. Pelletier made a great run to the far post and headed the ball past the keeper.

Little more than three minutes after the delay, the Argos equalized the game as Stephen Munoz found himself behind the defense and in a one-on-one situation with Ledgeway. Munoz slipped the ball past the diving keeper to tie the game at 1-1.

The Falcons retook the lead just 10 minutes into the second half as senior Steer sent a perfect corner kick into the box and Pelletier once again made the run and headed the ball into the net.

Ledgeway made six saves in the victory.

Sophomore Paige Scott scored both of the Falcons’ goals, including the first which came just 2:34 into the game. Sophomore goalkeeper Alyssa Maxwell picked up her second shutout of the season as she made three saves.

Montevallo (4-8-2 overall, 2-4-1 in PBC) jumped out to an early start as Scott scored an unassisted goal just minutes into the game. Scott blasted a shot over the keeper from 12 yards out to give the Falcons a 1-0 lead.

Montevallo held the Hurricanes scoreless in the first half as Maxwell made two saves.

Scott struck again just 11 minutes into the second half. Freshman Asgerdur Palsdottir sent a pass out to Scott, who sat 10 yards out in front of the goal. Scott fired a shot off the post to give Montevallo a 2-0 lead.

Maxwell had to make just one save in the second half.

The Falcons’ lone goal of the game came of a penalty kick from freshman Palsdottir, who scored her fourth goal of the season.

The Lady Argos outscored the Falcons 4-1 in the first half and added three goals in the second half to seal the victory. 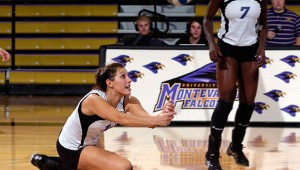 The lone Montevallo player with double-digit kills was Ati, who recorded 10 kills.

Garrison contributed 29 assists and a team-high seven digs. Wotitzky and Wilson chipped in five digs each.

University of Montevallo freshman Taylor Chapman was named the Peach Belt Conference's Player of the Week for the second consecutive... read more