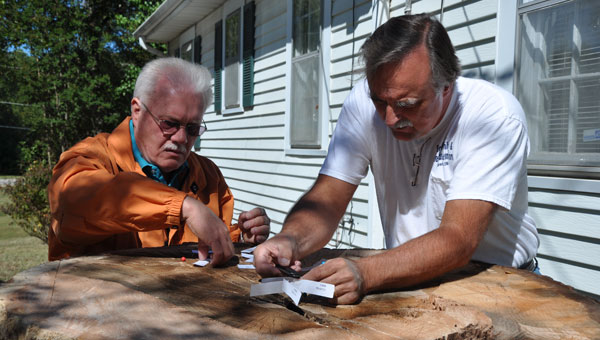 (L-R) Bruce Cooper and Billy Kirkland, members of the Reach family, plot out many of the family's significant events on a more than 100-year-old tree trunk during the family's reunion in Alabaster. (Contributed photo/Lois Reach)

In 1921, Samuel Crawford Reach and his wife, Hattie, hitched up their wagon, loaded what household goods they could carry and made the trek from Bibb County to a sharecropper shack in what is now Alabaster’s Keystone community.

For weeks after the family, which included five children, moved to Shelby County, Samuel Reach would ride his mule to his job at a mine in Marvel on Monday, stay all week and return to Keystone on Friday night.

“I remember my daddy telling my siblings and me that our Papa would ride his mule to Marvel, stay there during the week, and return home on Friday night,” said Linda Reach Moore, Samuel’s granddaughter. “Daddy told us that Papa would give the old mule the reins and the mule would get them home in the dark while Papa slept.”

Soon after the family arrived in Keystone, which is near the current-day intersection of Shelby County 11 and 68, Samuel took a job at the ice house in the Siluria mill town, and moved his family to the town off Alabama 119.

After working in Siluria for several years, Samuel made a deal with his brother-in-law, Clarence Buford, to purchase 80 acres off Shelby County 11 for $1,000, plus half of his harvest for 10 years.

“On the tenth year he (Samuel) didn’t have enough money, so the two men settled for the cash Papa had plus a larger share of the crops,” Moore said.

After purchasing the land, Samuel and his family purchased an abandoned house from the Acton Mining Company, tore it down piece-by-piece and moved it to the land he purchased on Shelby County 11.

The family moved into the newly rebuilt house in 1929, the same year Samuel and Hattie’s oldest daughter, Thelma, left home. Samuel and Hattie did not hear from their daughter again for 11 years.

“Then in 1938, she contacted her parents asking permission to come home,” Moore said.

“Of course, they were elated to hear from her, and welcomed her with open arms, and threw a big party under the shade of the big oak tree in their yard for her return, inviting family and friends alike,” Moore added.

Every year since Thelma’s homecoming, the Reach family has gathered at the Shelby County 11 home site to celebrate with each other. This year marked the 72nd family reunion, and the event drew more than 160 people, said Lois Reach, Samuel and Hattie’s granddaughter.

Shortly before the 2010 reunion, which was held Oct. 3, the owner of the former Reach family property on Shelby County 11 was forced to cut down the oak tree because it had deteriorated and was in danger of falling.

“A large tree had to be removed, and the property owners let us have a huge piece of wood from the trunk. It was probably more than 5 feet wide,” said Lois Reach. “We counted the rings, and we found out the tree was over 100 years old.

“During the reunion, we all made little pin flags and mapped our birth years and significant family events on the rings,” Lois said.

The event, which grows every year, drew family members and friends from across the country, Lois said.

“We had visitors from northwest Florida, we had a cousin who we met for the first time, and until just recently, we had a family member who came down every year from Wisconsin,” Lois said. “We all just had a wonderful time, and we plan to keep doing it every year.”

A unidentified driver plowed this car into the Saginaw Fire Station on Sunday afternoon. The driver suffered minor injuries and... read more