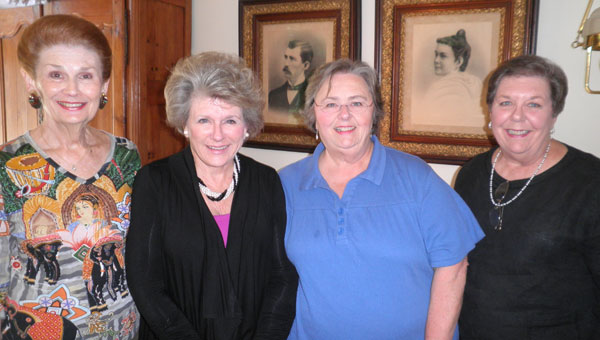 In November 1962, a group of women met to form an organization with the common bond of women of Southern ancestry. On April 14, 1963, the National Society of Southern Dames Inc. (NSSDA) was chartered and chose the visually impaired to be their philanthropy project.

In 1981, the NSSDA honored Helen Keller, who was blind and deaf, by building a gazebo on the grounds of Ivy Green, Keller’s home. Keller is an honorary member of the NSSDA and the gazebo will be continually maintained by the Society.

The purpose of the NSSDA is: “to provide the support of the entire Eye Program through contributions for ophthalmic research, donations to Eye Banks, signatures on Eye Donor cards, assistance to the blind or those visually handicapped, and the advancement of knowledge through the study of Southern culture, which includes history, literature, art, music and creative arts.”

Grund spoke at the meeting of the NSSDA’s program to promote the visually impaired. One of the first projects for the chapter will be for the members to distribute Eye Donor cards for eye donation is separate from body donation. The increase of eye donors is one of the primary goals of the Alabama chapter.

The NSSDA states that “Active Members shall be women of Southern Ancestry pertaining to the Southern States of the United States of America.

Each applicant verifying Southern Ancestry shall present an affidavit with seal of notary. Each applicant must include dates for all Southern ancestors listed on application.”

A friendly tea party at the Columbiana Library

Dr. Sheror Caton Moore with her book at the Friends of the Library Tea Party at the Columbiana Public Library.... read more