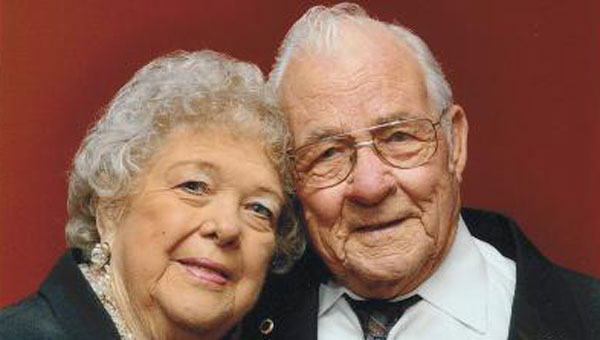 Beloved wife, mother, grandmother and great-grandmother, Billie Ruth Frost Spain, age 83, passed away on Oct. 17, 2010, after a brief illness with cancer.  Mrs. Spain was born Oct. 4, 1927 to Walter Shrider Frost and Mary Caroline Johnson Frost in Montevallo.  Jimmy and Billie Spain were married on Jan. 31, 1947 in Montevallo and enjoyed 61 wonderful years of marriage.  Mrs. Spain was an avid homemaker and devoted, loving wife and mother who cared for her husband, Jimmy, and daughters, Diane and Robin.

Mrs. Spain grew up in and attended Ebenezer United Methodist Church and was a member of the United Methodist Women.  She had been an active member of the Shelby County Home Demonstration Club earlier in life.  Mrs. Spain had been a board member of the Dogwood Fire Department, which later became known as West Shelby Fire Department, providing many hours of voluntary service to its development.  For many years, Mrs. Spain and her husband tirelessly and lovingly cared for her aunt, Anna Frost, until Mrs. Frost’s death in 2009.  Mrs. Spain’s pride and joy was a home on Lay Lake, which provided her and her husband many years of enjoyment and pleasure.

Mrs. Spain’s family, friends and everyone that knew her will miss her greatly and fondly recall memories and her acts of kindness that touched their lives in such special ways.  Rockco Funeral Home directing, Rockcofuneralhomes.com.