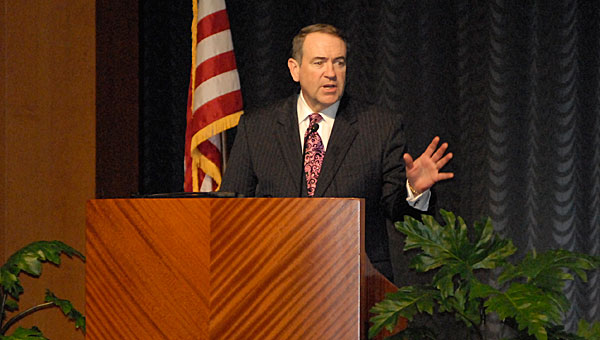 Sav-A-Life Shelby, which is based in Pelham and also operates a location on U.S. 280 in Hoover, celebrated its 25 anniversary during the dinner, which was held at the Cahaba Grand Conference Center off U.S. 280.

Huckbee, who was the keynote speaker during the event, urged the crowd to adopt pro-life views and support agencies like Sav-A-Life, a Christian organization which works to help and minister to individuals and couples facing unexpected pregnancies.

“There are some teens and adults out there who don’t always do what they are supposed to, and they get into trouble,” Huckabee said. “Is someone going to be there to tell them that God still loves them, and there is nothing they can do to make God turn his back on them?”

Huckabee praised Sav-A-Life, calling it a “ministry above all else.”

Before Huckabee’s speech, a video featured a 6-week-old boy named Caleb and his mother who said she contemplated getting an abortion when she was pregnant with him.

“In looking at Caleb’s beautiful face and head of hair, I realized a few months ago that (his mother) could have made a life-altering decision, and we would have never seen little Caleb,” Huckabee said. “God has a purpose for that little Caleb.”

Huckabee said America has been blessed because its citizens have valued human life since the country was founded.

“I think God has been good to this country because we are a nation that values human life,” he said. “Our founding fathers said that our basic intrinsic value and worth was that God created us. We may not all have sameness, but we all have equality.

“Equality means all of us have worth and value not because of something we do, but for who we are,” Huckabee added. “If God assigned value to all of us, it’s not my role to discount something he has put full value in. There is no such thing as a life that is disposable to him.”

Huckabee told the crowd of more than 300 to be wary of promoting a “life is disposable” mentality.

(L-R) Bruce Cooper and Billy Kirkland, members of the Reach family, plot out many of the family's significant events on... read more