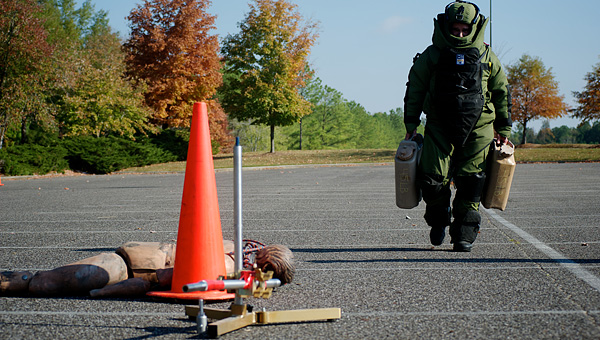 Jason Brown of the ABI state trooper bomb squad works an obstacle course in the parking lot at Regions Park during a bomb training on Oct. 20. (Reporter Photo/Jon Goering)

HOOVER – In a parking lot at Regions Park, a school bus and an 18-wheeler waited for the bomb squads.

Across the lot, a blast went off, but no one looked around, much less took cover.

The Hoover Police Department’s bomb squad hosted a bomb training competition Oct. 19-20 for bomb squads both in-state and out-of-state. Bomb technicians from as far away as New York and Connecticut were in attendance, said Hoover Police Sgt. Rod Glover.

The Hoover Police bomb squad responds to all bomb notifications in Shelby County.

The bomb training event included 20 different scenarios, ranging from a roadside bomb to an 18-wheeler stopped on Interstate 65, armed with a large vehicle bomb.

The event happens once a year. This year, the Hoover Police Department also used the event to raise donations for the Wounded Warrior Foundation to help bomb technicians who are injured in the line of duty.

“If something happens in another state, we’ll hear about it in Alabama,” he said. “I tell you what, this training will save lives.”