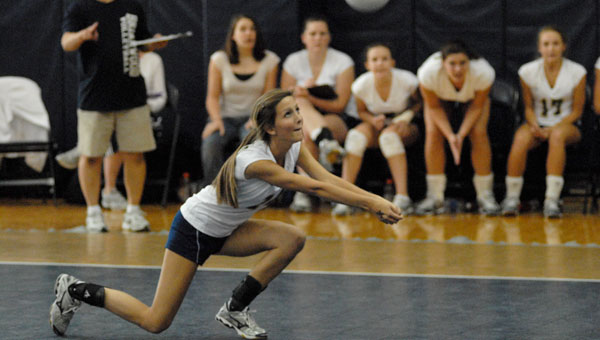 NORTH SHELBY — The Briarwood Christian School volleyball team’s 2009 season ended with a loss in the semifinals of the Elite Eight state tournament.

The Lions have a chance to make amends this year.

“This means the world,” Briarwood head coach Tien Le said. “I’m just beyond words right now because we were beaten in the first set, and the kids fought back.”

Even with the one-set deficit, Le said he never sensed panic among his players. Rather, the second-year coach saw some adjustments that needed to be made.

Not only was Briarwood working to get back even in the second set, the Lions were also looking to get the energy of the fans and students back into the match.

After trailing early in the second set, the Lions regained the momentum and jumped out to a 17-14 lead. It was a lead they wouldn’t relinquish.

Briarwood once again fell behind 10-8 early in the third set, but the Lions got the lead at 14-10 and held it once again to get the win in the third set with each point and each set win seemingly accompanied by a cheer from the fans and chant from the Briarwood students.

The Lions captured a victory in the fourth set to finish off the visiting Toros.

Le said his team fed off the energy of the home fans.

“The crowd made a huge difference. I think the crowd also helped intimidate Spanish Fort,” Le said. “The way Spanish Fort had us down in the first set and the second set, we couldn’t have done it without the crowd.”

Briarwood will take on John Carroll Catholic (16-23), the Match 8 winner, in the Class 5A quarterfinals Oct. 27 at 2 p.m. at the Pelham Civic Complex.