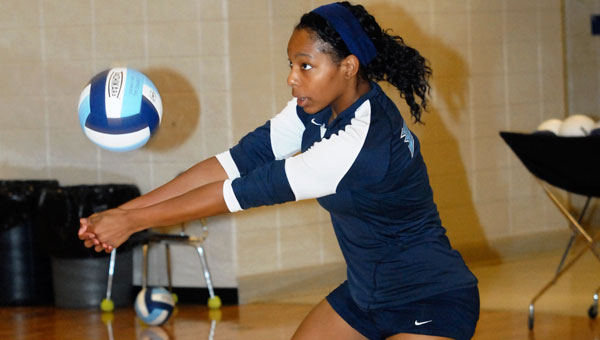 Calera High School volleyball coach Amanda Lewis took pride in the Eagles advancing to the sub-state round of the Alabama High School Athletic Association Class 4A playoffs for the first time in school history in last season.

Lewis worried about the way her team would handle the next step once her team clinched the next step — home-court advantage in the sub-state round — following a Class 4A region tournament last weekend.

Lewis knew home-court advantage was the only advantage the Eagles had in a sub-state meeting Oct. 21 with traditional Class 4A power Alabama Christian Academy of Montgomery.

After winning the first two points of the match, the Eagles struggled the rest of the way in a 11-25, 18-25, 17-25 loss to visiting Alabama Christian.

“It’s difficult (to win) when you get complacent because you’re hosting a sub-state match,” Lewis said. “Alabama Christian deserved it. They came ready to play.”

After dropping the first game, the Eagles rallied from an early deficit in the second game to cut the Alabama Christian lead to 23-17 late in the game following a kill by Harris on an assist by Rasmussen.

Alabama Christian clinched the final two points of the second game and kept a comfortable lead in the third game.

Lewis said she hopes the Eagles returning next season learn from a second-consecutive loss in the sub-state round of the playoffs.

“(Alabama Christian) is a better team than we are,” Lewis said, “but we didn’t put up a fight.”