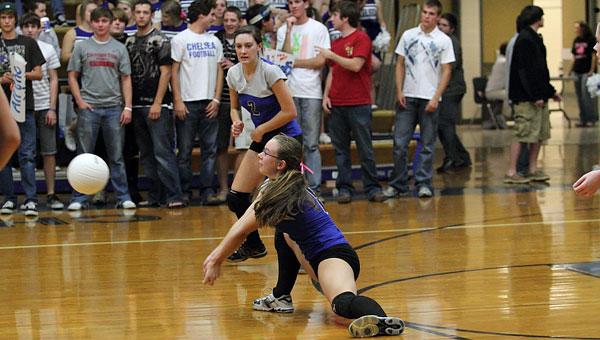 Chelsea High School volleyball coach Jamie Gill didn’t know what to expect from her players in the Hornets’ first-ever appearance in the sub-state round of the Alabama High School Athletic Association Class 5A playoffs.

However, Gill knew plenty about their opponent. Gill expected Chelsea would have a tough time against a taller Gulf Shores team in the sub-state round Oct. 21.

“Gulf Shores is very strong offensively,” Gill said. “Their height exceeds most teams. Our girls gave it everything they had.”

Handley added a team-high 16 digs and a block.

After dropping the first game, Chelsea rallied back from a deficit midway through the second game to pull within 23-21 following a kill by Handley.

Gulf Shores responded by winning the final two points in the second game and coasted in the third game.

Despite the sub-state loss, Gill said the Hornets accomplished a lot during the 2010 season. Chelsea had never advanced past the region tournament, Gill said.

“It’s been a great season,” Gill said. “We’ve had the best year ever for Chelsea.”