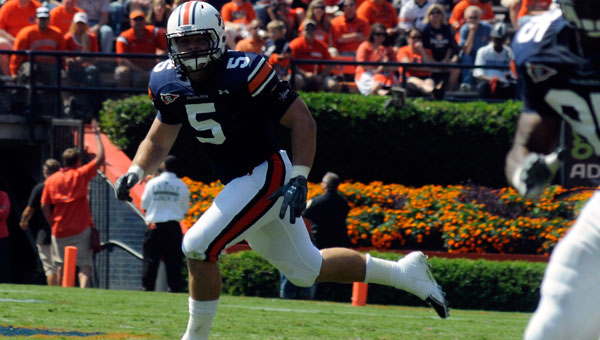 He couldn’t quite put his finger on it, but it just felt right to Jake Holland.

Holland, who starred as a three-year starter at middle linebacker for Pelham High School from 2007-2009, was looking for a place to continue his football career after high school.

During his junior year at Pelham, Holland took a visit to Auburn University to check out the Tigers’ football program and meet with first-year head coach Gene Chizik.

Holland left his visit high on the Tigers. So high, in fact, that he was ready to make an early pledge to Auburn.

Holland committed to Auburn on April 4, 2009, becoming the Tigers’ second commitment of the 2010 recruiting class.

“It wasn’t really one thing (that sold me on Auburn),” Holland said.

One of the many aspects the now 19-year-old liked was the vibe he felt from the Auburn coaches.

The idea of early playing time was also appealing to Holland, as Auburn had just three scholarship linebackers on its roster in 2009.

“The more you play, the better chance you have at the next level,” Holland said. “(Playing time) was a big factor in my decision.”

The fact that Holland even considered Auburn may have come as a surprise to some since he grew up rooting for the Tigers’ cross-state rival.

“I was an Alabama fan all my life,” Holland said. “My allegiance was always with Alabama.”

Holland said he started to part ways with his feelings as a fan during his recruitment.

“Once the recruiting process starts, your perspective begins to change,” he said.

Holland’s recruitment, however, was far from over.

The 6-foot, 231-pound prospect topped his 129-tackle junior campaign at Pelham with a monster senior season in which he racked up 153 tackles, 16 tackles for loss, one sack, four forced fumbles and three interceptions.

Holland was named a first-team Class 6A All-State selection following his senior year and joined seven other recruits who would eventually sign with the Tigers to play in the 2010 ESPN Under Armour All-American game in Tampa, Fla.

Schools from around the country began to take notice.

Ranked as ESPN’s No. 8 middle linebacker and the nation’s No. 8 inside linebacker by Rivals.com, Holland drew scholarship offers from approximately 26 schools, including Tennessee, Ole Miss, Vanderbilt, North Carolina, UCLA, Stanford and Florida State.

Holland, however, stuck with the Tigers, and multiple visits to Auburn throughout his senior year along with his official recruiting visit in early January only made his feelings stronger.

“I fell in love with (Auburn),” Holland said. “It was definitely the best choice for me.”

Holland signed with Auburn in February and took to the field for the first time as a college player in August.

Holland’s playing time this season has come as a backup to three-year starter Josh Bynes, a preseason All-Southeastern Conference selection.

With Bynes taking nearly all the snaps, Holland said the season has provided him with an opportunity to learn under the senior.

“He’s been teaching me from day one,” Holland said. “He’s been pushing me to work hard every day. He told me that when he leaves, he still wants the tradition to continue. He’s been a mentor.”

Still, Holland has been able to provide depth at linebacker and give Bynes a breather from time to time.

The true freshman has seen action in three games this season, registering three tackles, one sack, one pass break-up and a fumble recovery.

With Bynes graduating after this season, Holland is hopeful he can fill in as Auburn’s middle linebacker and pick up where Bynes left off.

“I’m pretty confident I can win the job,” Holland said. “I’m going to have to put in a lot of work to win that spot, but I can do it.”