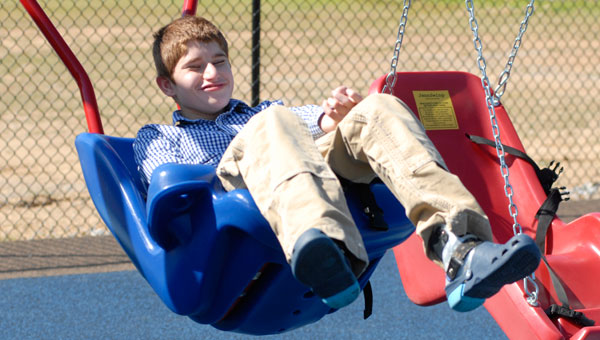 As soon as the ribbon dropped on the new adaptive playground at the Linda Nolen Learning Center in Pelham, smiles and laughter from students and parents alike filled the air.

Nearly every day for a year, the LNLC students have watched as the playground came together piece by piece, waiting for their chance to swing, slide and climb.

“This gives the kids a chance to do something that every child gets to,” said Michelle Murray, an LNLC teacher. “Now, they are not hindered by something they can’t control.”

The project came about through the efforts of several of the school’s parents, who have worked for the past three years to raise thousands of dollars in donations, and a $70,000 grant secured by state Reps. Cam Ward, R-Alabaster, and Mike Hill, R-Columbiana.

The ground around the playground equipment is covered with a soft, sponge-like material designed to cushion falls and prevents cuts and scrapes.

Equipment at the playground includes a trio of slides, a suspended bridge, a small climbing wall, colorful bongo drums and more.

The playground also features a swing set, complete with a pair of standard swings, two swings designed to provide greater support for special-needs students and a swing designed to house a wheelchair.

“It just gives the kids the opportunity to participate in play equipment,” said LNLC Principal Michelle Shepherd. “It has a lot of sensory items for the kids to use.”

The main play structure is accessible by ramp, and a wide walkway on the structure allows wheelchair-bound students to join their peers as they utilize the playground’s offerings.

“Some of these kids haven’t been able to be on a swing before,” Murray said. “That gives them so much freedom, because they get the sensation of soaring.”

Soon after the playground’s ribbon cutting and dedication, many of the center’s students and their parents rushed to play on the new equipment.