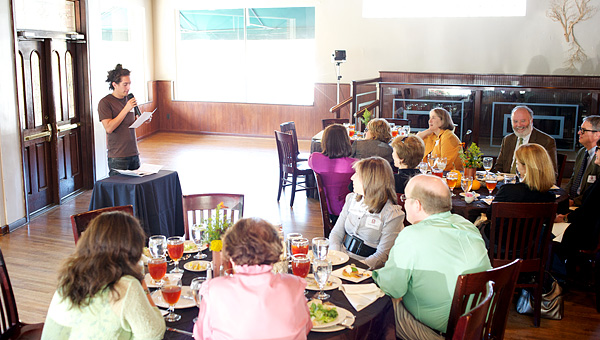 This summer Alarcón was named one of the The New Yorker’s “20 Under 40” top young fiction writers and has won several literary awards.

Alarcón is the author of “Lost City Radio” and “War by Candlelight,” both fiction pieces about Peru, where he was born. He currently lives in Oakland, Calif. where he is the associate editor of the monthly magazine, Etiqueta Negra.

Alarcón graduated ISS in 1995 and said his time there helped shaped his writing career.
“I have fond memories of the school,” he said. “It’s always great to come back to visit. I was really fortunate to have some excellent teachers and the school gave me a lot of freedom. I remember a time when I really wanted to read certain books by Russian authors so they created a Russian literature class with just me, a teacher and one other student. That kind of thing never happened to me again in an academic situation.”

During the luncheon Alarcón read an excerpt from the novel he’s currently working on in which he writes more about his experiences growing up in Birmingham. He started writing the book after writing several magazine pieces on similar subjects in Spanish, he said.

“It was easier to write about this stuff in Spanish because I knew people wouldn’t read it,” he said. “By doing that I found my voice to describe my experience in the South.”

Ginger Rueve, president of the ISS Alumni Council, said she’s known Alarcón since he was 4 and was glad he could make the trip back to speak at the annual luncheon.

“Daniel is a fantastic writer and a great speaker,” she said. “We’ve been trying to get him to come back and speak for a while now. His sister was in my grade, so I grew up with him and am very proud of him.”

Alarcón has visited ISS several times since he graduated, including guest teaching a class several years ago. He said he enjoys visiting but hopes the students don’t rely on him for inspiration.

“I don’t think the students need me to be inspiration,” he said. “To write, you just have to look around your own world and that’s inspiration enough.”